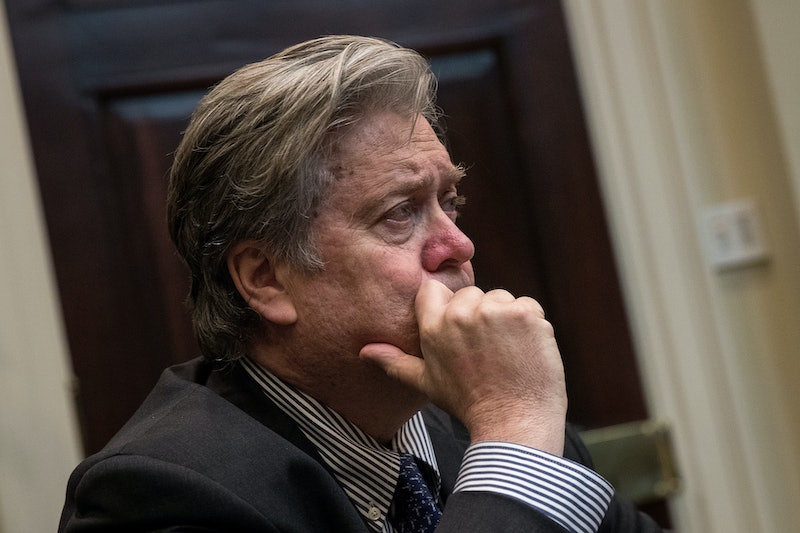 Since he broke out onto the political scene, Steve Bannon, chief strategist to President Donald Trump, has been compared to some pretty horrendous things. Even Bannon once favorably compared himself to Dick Cheney, Darth Vader, and Satan all in one sentence. Yet as Americans continue to debate which totally no good thing Bannon resembles most, one media network recently sought to remind viewers it could be worse. Fox News used an absurd chart to argue Bannon isn't as bad as Islamic State leader Abu Bakr al-Baghdadi.

To their credit, Fox News' decision to visualize Bannon and Baghdadi's accomplishments in a side-by-side comparison wasn't completely random. The chart was a response to an op-ed published by USA Today which compared Bannon to the leader of the Islamic State. The column argues Baghdadi and President Trump's chief strategist share a similar world view revolving around an apocalyptic "clash of civilizations between Islam and the West."

Not so, says Fox News, which rode to Bannon's defense last week with an easy to read chart centered around the argument that Trump's chief strategist isn't as evil as one of the world's most notorious villains. The chart, which was broadcast during an episode of Tucker Carlson Tonight, isn't arguing that Bannon's a good guy, so much as it's arguing his track record isn't on the same level as that of Islamic State leader Abu Bakr al-Baghdadi. While Baghdadi has beheaded journalists, used chemical weapons on Kurds, employed child soldiers, mass-executed Christians, and declared a caliphate, Bannon comes up short in all five counts.

In debuting his chart Tucker Carlson Tonight host Tucker Carlson claimed it was "over the top" to compare Bannon and Baghdadi as any problems one might have with Bannon exist on "an entirely different scale" than Baghdadi's war crimes. "[Bannon] hasn't, as previously noted, done the things we've listed on the screen. He hasn't actually committed any atrocities al-Baghdadi has," Carlson said.

Unsurprisingly, the absurdity of the chart didn't go unnoticed by the internet. Within hours the chart had become a meme with photoshopped versions of the graphic cropping up on Twitter.

The problem is the USA Today op-ed wasn't arguing that Bannon and Baghdadi share similar resumes, but rather that they share similar ideas on the world and the divide between Islam and the West. Even a quick scan of the op-ed makes it abundantly clear USA Today's editorial board wasn't making an on the surface comparison of Bannon the man to Baghdadi the man, making Carlson's chart the only "over the top" comparison.

Carlson's chart is further problematic in that it appears to set the bar drastically low for Bannon. What does it say about a defense grounded in the argument that the president's chief strategist is a "good guy" because while he may employ a "clash of civilizations" narrative similar to that of the Islamic State to incite hatred at least he hasn't personally murdered anyone? Moreover, can we really afford to set the bar so low?