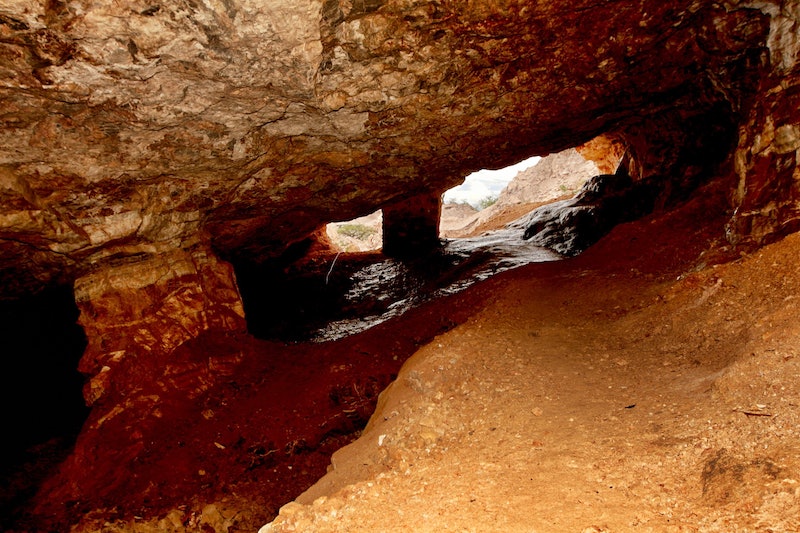 Last weekend, Lukas Cavar was forced to live out a scenario most of us will hopefully only ever experience in stress dreams. The 19-year-old Indiana University freshman was trapped in a cave for nearly three days after his fellow members of the Indiana University Caving Club left without him, and locked the gate to the cave closed behind them.

The physics major survived on Clif bars he had brought with him, and licked the moisture off the damp cave walls for hydration. He also typed out goodbye messages to his friends and family on his phone.

“I was very confused and pretty scared,” Cavar told the university's newspaper, the Indiana Daily Student. “It took me a little while to wrangle my emotions and sort of approach things analytically, sensibly, to come up with a game plan to survive.”

Cavar and 12 other members of the Caving Club arrived at the Sullivan Cave at 10:30 a.m. on Sunday morning, where the club leader unlocked the gate to the cave with a padlock. The students divided into two groups, and spent the next three hours exploring. When it came time to go back, the spelunkers had to pass through a section of the cave known as the Backbreaker, because it requires you to hunch over to climb through.

Cavar told the Daily Student he didn't enjoy the Backbreaker portion, so he thought he'd try to "bang it out." He sped up to meet the group in front of him, but in his haste, he missed the rift in the wall that leads to the cave's exit. When he realized his mistake, Cavar decided to stay put so people could find him, instead of risk getting more lost. But nobody came.

After waiting for half-an-hour, Cavar managed to find his way to the exit, where he found the gate padlocked shut, and none of his fellow cavers were anywhere to be found. Searching around the cave, he found a paper clip which he used to saw at the padlock for six hours, before eventually giving up to preserve his strength. That night, in attempt to avoid the bats who he feared might carry rabies, Cavar retreated further into the cave, where he typed out goodbye messages to his loved ones.

The next day, Cavar spent hours licking the moisture off the walls in attempt to stay hydrated, and walking around when he felt himself getting cold. He also preserved his own urine in his empty water bottle. Even though it was too cold and he didn't have the tools to turn make it drinkable, Cavar said experiments like that gave him hope.

By the third day, Cavar's energy was severely depleted, and he considered eating cave crickets. Finally, that night, the club's leaders arrived to rescue him. Cavar was looked over by an EMT, and given fresh socks, a sweatshirt, pasta, and a Big Mac.

“Probably the best food I’ve had in my life,” he said.

So far, the Caving Club's leaders have refused to explain how Cavar got left behind, because it is a "sensistive legal matter." They did say they conducted a head count before and after exploring the cave, and that each person had a buddy.

“We have a series of rigorous protocols in place that are supposed to prevent situations like this, but they are only effective if followed,” the club's president wrote in a statement. “We had a failure in our leadership to closely follow all these safety procedures. The risk that our member was exposed to as a result of these failures is a vivid reminder of why we have protocols.”

Cavar meanwhile, says he's recovering well, and feels bad for his fellow cavers. “You could tell they were pretty shaken up,” he said. “They did near kill me. I can’t imagine what kind of guilt they felt.”

More like this
What To Know About Martin Bashir After Watching 'The Crown'
By Bustle UK
Iran Has Issued A Death Sentence Over Mahsa Amini Protests
By Catharina Cheung, Darshita Goyal and Maxine Harrison
David Tennant’s Transformation In ITV’s 'Litvinenko' Is Astonishing
By Sophie McEvoy
Here’s Your Daily Horoscope For November 30, 2022
By Mecca Woods
Get Even More From Bustle — Sign Up For The Newsletter