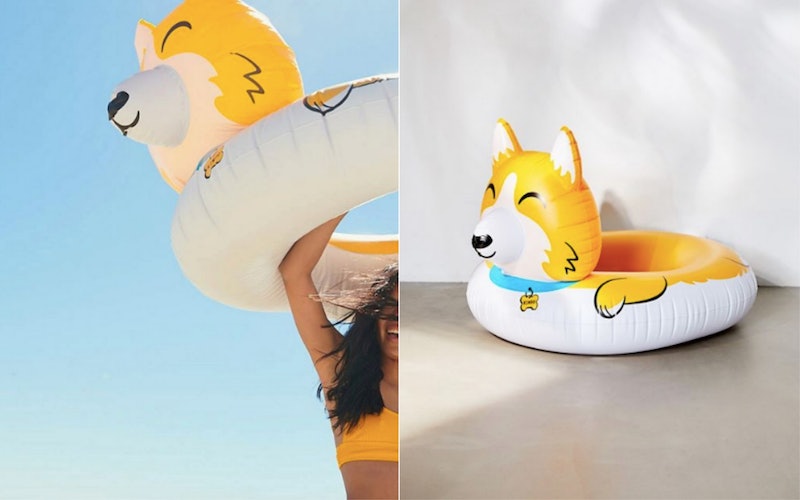 The sun is shining and the temperatures are rising, which could only mean one thing: it's pool float season. Few items have taken celebrity Instagram my storm like pool floats. In the past few years, it has been difficult to go a few days of summer without seeing a photo of a celebrity atop an inflatable creature in a swimming pool. But, photogenic pool floats are not just for A-listers anymore — you can get your own Corgi Inner Tube Pool Float right now at Urban Outfitters.

With spring now in full swing, Urban Outfitters has debuted a whole slew of new pool floats for spring break and beyond. But one, naturally, leads the pack in terms of its appeal. The Corgi Inner Tube Pool Float is like a hybrid of an exceptionally cute pup and a donut. The inflatable vinyl inner tube has the head of a corgi protruding from one side, and the image of a collar that reads "Ringo" below his face. His eyes are closed and he smiles, which leads you to assume he is just as content as you are to relax in the sunshine.

The Corgi Inner Tube Float is basically all the fun of having a puppy friend accompany you to the beach without the wet dog smell. Also, you can ride it in the waves, which is not recommended with a regular corgi.

The corgi is just the most recent addition to the market of canine-shaped pool floats. Last year, beach bums in the UK were lucky enough to have access to this giant wiener dog pool float. The the full name of the float is the "Giant Premium Inflatable Dachshund Wiener Dog Doxie Sausage Dog Lounger Pool Float Mattress," making it perhaps the float with the longest name, in addition to the pup with the shortest legs. Unlike the Corgi Inner Tube Float, the Sausage Dog Float is shaped like a mattress, allowing you to lay back and relax atop the water. Customers on Amazon report this guy is also REALLY BIG, which, you know, is totally realistic.

Urban Outfitters may only have one float that looks like an actual pup, but it is worth mentioning there is one more canine-inspired pool float. Structurally, Urban Outfitters' Dog Balloon Inner Tube Float is like a combination of the Sausage Dog Float and The Corgi Inner Tube. It is shaped like a balloon animal dog, and ideal for lounging in, unlike a inner tube. Maybe by the end of summer you're have an entire pack of dogs you can inflate and bring in the pool.

In addition to the corgi, there are a number of other pool floats from Urban Outfitters you can add to your summer swim lineup. It would appear the animal kingdom is a primary source of inspiration for the company this time around. If you're looking for a pool float unlike anything you'll see in your neighborhood, you might take interest in a Zebra Pool Float, a Tiger Pool Float, a Parrot Pool Float, a Llama Pool Float, or a Unicorn Pool Float, all of which are now available on Urban Outfitters' website.

What ever animal floats your, er, float is sure to be the envy of all your Instagram followers.