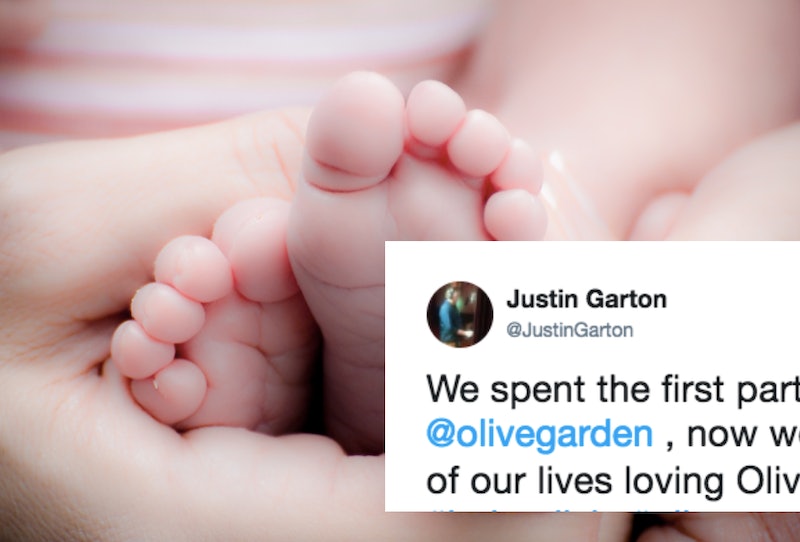 Let's be real, coming up with a name for your kid that you and your partner both love is a huge trial. But one couple has found a way to make that decision easier: Name your kid after something you both love. Like, say, Olive Garden. That's right — Arkansas couple Justin and Jordan Garton are planning to name their child Olivia Garton, after the mutually beloved Italian restaurant.

According to The Daily Meal, he and Jordan, 26, share a particular fondness for Olive Garden because it's "the restaurant where they have shared numerous dates over the course of their relationship." TODAY reported the couple "once spent seven straight weeks eating at their local Olive Garden restaurant in 2015 to save money during a time of financial difficulty." They managed to score a $100 Neverending Pasta Pass, which allows customers to eat an unlimited amount of pasta for a specific amount of time. The Gartons were able to eat Olive Garden dinners on the super-cheap, then take the leftovers home for the next day's lunch.

Justin told TODAY that his friends and family members "picked up on the Olive Garden reference immediately," and "[have] been having a field day with it."

While Olivia Garton is an iconic name all its own, the Gartons did originally consider just going with the much less subtle Olive Garton. "[O]bviously we got a big kick out of that, but kids are cruel nowadays, so we wanted it to be a bit more subtle," Justin told TODAY. He added that eventually, they ended up choosing Olivia because "Jordan is a third-generation Italian-American so she wanted to pick a name inspired by her heritage."

"We were able to make the joke, but a little more subtle, and it’s still a pretty name," Jordan told ABC News. "It was definitely an easy decision."

And it looks like Olive Garden is giving the love right back to the Gartons. A spokeswoman for the restaurant chain told ABC News that Olive Garden had already sent the Gartons a "little surprise," and when Olivia is born — she's due Dec. 6 — will be sending food and gifts.

"We couldn’t have been more thrilled upon hearing about [the Gartons'] growing family," the spokeswoman said. "We always love hearing the unique ways our guests have been able to connect with Olive Garden, and we can’t wait to meet baby Olivia."

If Olivia's anything like her parents, she can't wait to meet Olive Garden, either.

While some folks may tilt their heads at people naming their child after a restaurant chain, rest assured Olive Garden is tame compared to some other odd things parents have named their kids after. In August 2017, a Kansas couple won $5,000 for naming their baby after the website Internet Underground Music Archive, aka IUMA. According to ABC News, the site offered up the choice of either $5,000 or free music to 10 families who named their newborn babies "Iuma." The Kansas couple, Jessica and Travis Thornhill, were the first to claim their five grand after they named their new kiddo Iuma Dylan-Lucas.

"My wife liked the idea because the child’s grandma said this baby would bring prosperity, and this contest could be what she was talking about," Travis told ABC News. "Plus, the kid will have a cool story when he grows up."

Nobody can argue with that.

More like this
I Tried The $20 TikTok Viral Oishii Strawberries — Here's What I Thought
By Sophie Hanson
Trust Me, Pickle Martinis Are The New It Drink Of The Season
By Emma Carey
25 Things I've Reduced My Life To, In Addition To WFH In My PJs
By Ginny Hogan
13 Selfie Instagram Caption Ideas That Exude Main Character Energy
By Jessica Booth and Emma Carey
Get Even More From Bustle — Sign Up For The Newsletter