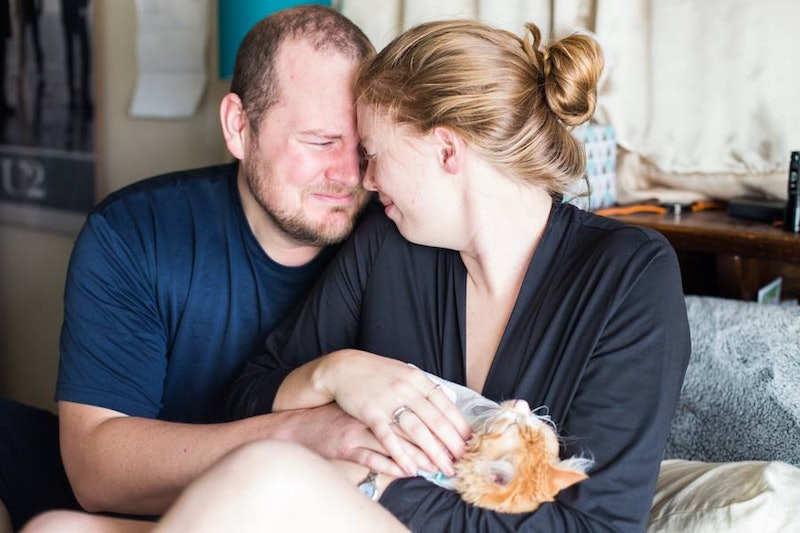 Plenty of people think of their pets as children from another mother — the mother, in this case, being another species — but one Denver couple has taken the idea to a whole new level. Lucy Schultz and her boyfriend, Steven, welcomed a new kitten with a "cat birth" photo shoot mimicking the traditional photos taken at human births. Did you think you were the most adoring cat parent in the world? Unless you, too, held a kitten's head between your legs to pretend to give birth to your new feline companion, Schultz has got you beat.

Schultz, a wedding photographer, told Denver's 9 News that she was once a "crazy cat lady who didn't have any cats." When she and her partner of three years decided they were financially stable enough to introduce a fluffy critter into their home, they searched high and low for the perfect kitten. Choosing a cat is a big deal for any family, but for Schultz, the process was especially important. For one thing, this kitten would be the first of many. For another, she had been feline-free for years until she finally chose to settle down and take care of one, so adopting a cat represented a change in her overall lifestyle.

All this is to say that the new kitten was a Big Deal, capital letters very much necessary. As a photographer, Schultz is familiar birth announcements, and she knew she wanted to mimic one even before she found the five-month-old orange and white fluffball she and Steven ended up adopting from SoulDog Rescue. When the time came, she enlisted the help of her friend, Elizabeth Woods-Darby, to take the photos. (You can find Woods-Darby on Instagram under the handle @barefootinthefog.)

In a Facebook life event, Schultz announced the adoption. "On 1/10/18 we welcome our first baby kitten, a neutered male DLH," she wrote. "He is 22" long and weighed 6 pounds 7 oz. He is already eating solid food. Name to be announced. We are so in love."

The photoshoot follows every major moment in a human birth. First, Schultz's boyfriend supports her through "labor," then the unnamed kitten's head crowns between her legs. Yes, it's just as hilarious (and/or odd) as you're imagining.

Next, there is cuddling. Lots and lots of cuddling. The kitten may be new to this world, but he looks like he's settling in just fine.

On her website, Woods-Darby wrote that she enjoyed taking the photos. "As a photographer and videographer, capturing birth and those raw first moments as a family, are incredibly rewarding," she wrote. "​Although this shoot was unconventional, I've always been impacted by the beauty and raw strength of birth and adoption. It’s brave and messy and vulnerable and my favorite images are always the ones that tell that story." In this case, the story was a woman giving birth to a five-month-old kitten. Bless the Internet.

The Facebook post went viral, with more than 27,000 likes and 72,000 shares. People seem to be divided into two camps: those who found it hilarious, and the ones who thought it was totally weird.

"Something to do with our dogs," wrote one Facebook user, tagging a friend. A different woman was less than enthusiastic about being tagged. "...I don’t even know how to react. Other than to assure everyone I will not be doing this," she wrote.

For her part, Schultz has maintained a sense of humor about going viral, telling 9 News she didn't expect to be famous for giving fake birth to a cat, but she would go with the flow. "It used to be like ‘winning best actress’ and now it’s cat photos! You roll with the punches, you know?" she told the news station.

To see the entire photoshoot, you can head over to Woods-Darby's website or check out Schultz's original Facebook announcement. With that, there's just one thing left to be said: Congratulations to the happy couple.