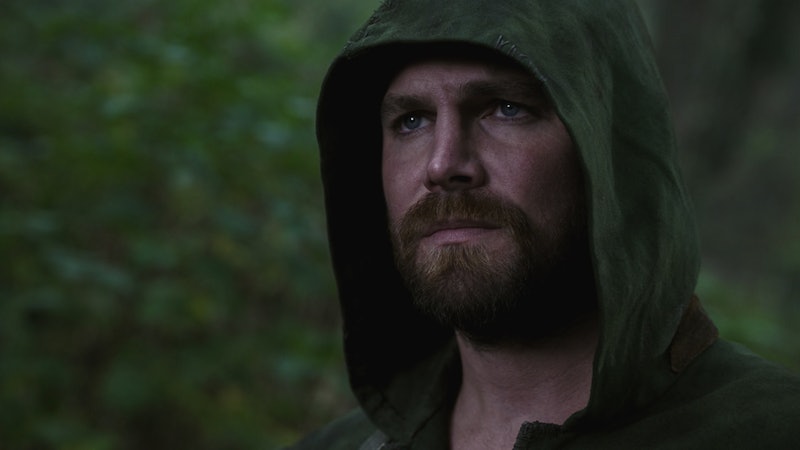 Warning: spoilers for "Crisis on Infinite Earths Part 3" ahead! You either die a hero, or you live long enough to see the multiverse crumble to dust. Such is the case for the heroes that remain within the Arrowverse crossover, thanks to the Anti-Monitor's wrath. His anti-matter canon has wiped out numerous Earths and beloved characters; however, there's one "Crisis on Infinite Earths" theory that suggests not all hope is lost and that Oliver Queen could be the key to undoing everything that has been done.

At the end of The Flash episode on Dec. 10, the only remaining people left in the entire universe were Supergirl, Batwoman, Sara Lance, Ryan Choi, J'onn J'onzz, Barry Allen, and Lex Luthor, all of whom were zapped to the Vanishing Point by Pariah in the hopes that they can find a way to solve "Crisis." But what if the fate of the worlds doesn't rest on them? What if Oliver's fate is what ultimately restores the multiverse to what it once was? After getting killed in Part 1 and resurrected in Part 2, Part 3 saw Oliver decide to remain in Purgatory (aka Lian Yu) after a man named Jim Corrigan informed the Green Arrow that his destiny lies elsewhere.

"I'm also someone else. I'm something else. A spectre," he told Oliver, adding: "In another life I was a decorated police officer, a hero in my own right. But then I was called to a higher purpose. It's your turn now, Oliver. Only you can light the spark, Oliver. It is your destiny.... To save everyone. Otherwise all universes, all the people you love, will perish."

After hearing that, Oliver knew he needed to stay where he was and assist in any way he could. Nothing else was revealed about what happens to him next, but it's possible Oliver's new identity will play an important part in the final two installments of the Arrowverse crossover when it picks up after the holidays on Jan. 14.

In the DC comics, Spectre is a godlike antihero whose mission is to exact vengeance against the wicked. Given that he's basically an extension of God, he's omnipotent and posses extraordinary powers, which range from having super strength to being able to fly as well as control time and space. That's pretty impressive and a major upgrade from the bow and arrow tactics he's used to (no offense). Abilities like that could come in handy during "Crisis," and as Twitter user @MArtRevenge points out, it could be what brings all the of Earths and characters back to life.

Oliver has spent eight seasons exacting vengeance and his own form of justice on the evildoers of Starling City, so becoming Spectre feels like a natural step for his storyline to go. (And fans already know he looks good in green.) Not to mention, Oliver also shows up in the latest "Crisis" promo, stating to Barry that he's not sure the eight of them will be enough to take down the Anti-Monitor. Since only six heroes and Lex Luthor remain, that means Oliver is including himself in that tally, implying that he intends to help fight. So if he does posses some God-like abilities, there may be hope for the multiverse after all.

More like this
Netflix Shut Down 'Bridgerton' S3 Rumours About A “Very Dark” Storyline
By Bustle
This 'Gossip Girl' Wardrobe Error Has Gone Viral On TikTok
By Alyssa Lapid
'The Last Of Us' Has Officially Been Renewed For Season 2
By Darshita Goyal
This Dark 'Happy Valley' Theory Will Keep You Up At Night
By Sophie McEvoy
Get Even More From Bustle — Sign Up For The Newsletter
From hair trends to relationship advice, our daily newsletter has everything you need to sound like a person who’s on TikTok, even if you aren’t.