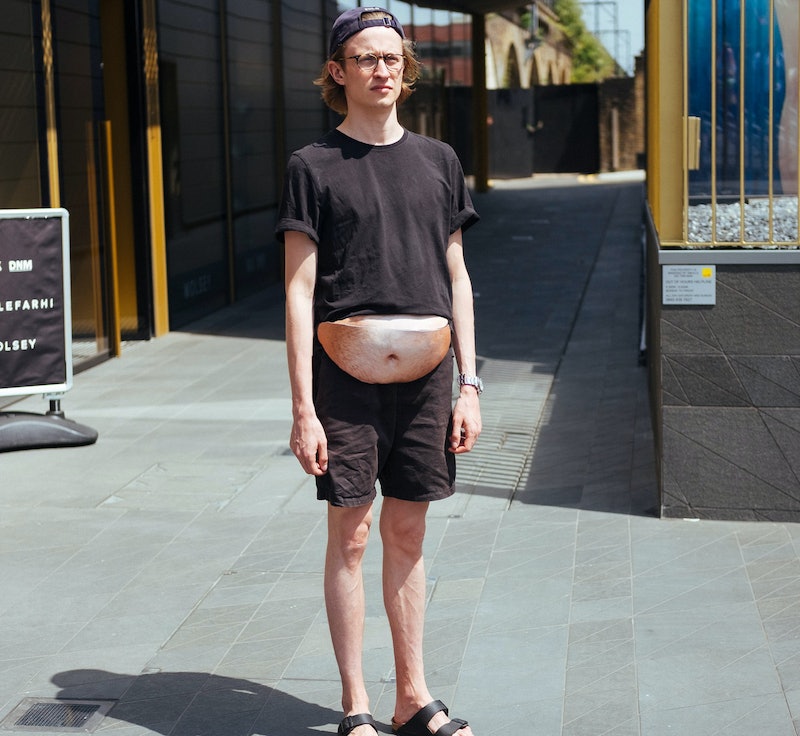 This year has seen its fair share of unfortunate trends, but nothing is more cringeworthy that co-opting bodies for questionable fashion. Regrettably, the trend doesn't seem to be going anywhere, thanks an the equal parts creepy and offensive "dad bod"-inspired fanny pack dubbed The Dadbag. Yes, you read that right. The "dad bod"-like swimsuit that set the internet ablaze just mere months ago has now officially made its way into the world of accessories. Well, sort of.

The Dadbag is technically not a real product yet, though the accessory certainly has mass production dreams. Currently, the creator of the bag says he's looking for production partners to bring The Dadbag to life.

But once you think deeper about the printed fanny pack, you might wonder if that is the best idea. In case you weren't already convinced based on creepiness factor alone, the body shaming behind The Dadbag should be enough to convince you that this accessory is better as a prototype.

While undeniably strange to look at as a mere optical illusion, The Dadbag isn't as innocuous as it may seem. The fanny pack takes the hairy chest swimsuit trend and pumps it up an offensive notch by distinctly poking fun at plush stomachs, riffing off the idea that fat bodies are undesirable and laugh-worthy.

Upon first glance, The Dadbag may elicit these giggles from some for it's silly styling. But it's important to (literally) unpack why we are amused by the accessory — and the source of comedy has some undeniable body-shaming roots.

The normalization of mocking bodies no longer just happens in anonymous comments on social media or on childhood playgrounds. It's now cleverly disguised as an "innocent" joke via a seemingly playful accessory.

You see, the Dadbag takes a plus-size male body and co-opts it for laughs in a way that is undeniably shaming. The Dadbag, which no doubt refers to the dad bod, has several styles and all solely depict the stomachs of hairy, fat men. And that's on purpose — these bags are supposed to be thought of as comically grotesque and disgusting by riffing off of fat shaming stigma.

In one particularly telling image from The Dadbag's concept website, someone can be seen popping open a beer in front of the simulated stomach in a rather overt reference to the term "beer belly."

All of the stomachs depicted on the fanny packs feature bodies that masculinity standards have deemed "undesirable." Seeing a thin person — as all of The Dadbag's models are — mimicking that body type through the pack, then, is supposed to be a silly gag.

But while buyers can peel off the fanny pack at the end of the day, people who actually have bodies like the ones depicted on The Dad Bag cannot remove the stigma of fat shaming. Ever.

And that's where the punchline becomes completely unfunny.

Men may not experience the same relentless body shaming as women, but giggles around The Dadbag do raise an important gender-based question. If this product were to show a stereotypical women's plus-size body, would we still be laughing, especially given all the conversation around body positivity? Or would the product go viral with outrage?

It's true, everyone loves a good joke. But when the joke relies on putting someone else down, it's much less fun. Maybe try a regular fanny pack for toting around a beer next time.