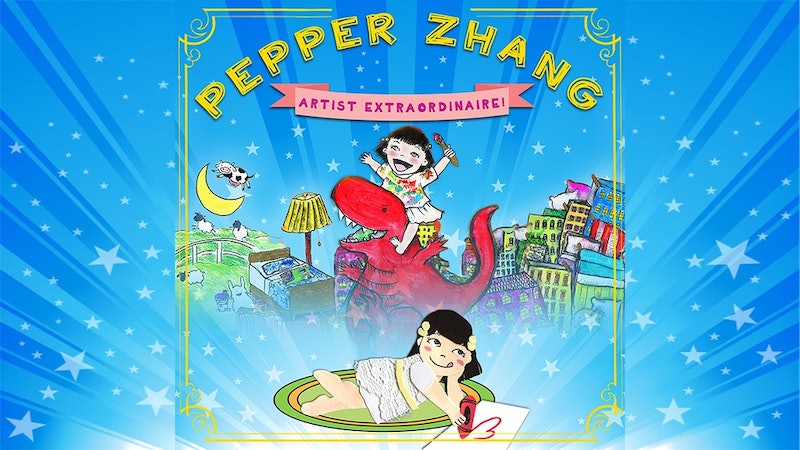 Growing up, Jerry Zhang can't remember reading a book that centered his own Chinese-American identity. When it came time to begin reading with his own kids, this dad still couldn't find any children's books with Asian protagonists — so he wrote one.

Titled Pepper Zhang: Artist Extraordinaire!, the book is inspired by Jerry's oldest daughter, Madison, who loves music and art and who, one day, told Jerry that she didn't want to be Chinese anymore if the characters in her favorite books weren't. Seeing parallels with his own childhood, Jerry immediately began researching alternatives to Madeline and Eloise.

"Many of the books that did feature Asian children were centered around cultural themes like Chinatown, Chinese New Year, or Chinese characters, which was great," explains Jerry in his Kickstarter video. "But I was really looking for books that just followed the story [of] a really cool and awesome child [who] just happened to be Asian."

And so Pepper Zhang, who discovers her artistic passion after a particularly brutal temper tantrum, was born.

Though he originally planned to create the book solely for the enjoyment of Madison and her sister, Everly, Jerry soon realized there was a greater public need for a feisty, creative, Asian-American, female hero. He crowdsourced to fund the production and storage of his book, having decided to forgo a corporate publisher who would "ruin the spirit of the book and dictate the development of Pepper's character." The Kickstarter campaign ended on May 16 and raised more than $30,000, immensely exceeding their goal of $5,000.

A severe lack of diversity within the publishing world is a well-documented issue, having inspired everything from the #WeNeedDiverseBooks campaign to Marley Dias' #1000BlackGirlBooks (which brought up maybe my favorite literary-related question ever: "Why are there so many books about white boys and their dogs?").

Despite these efforts, the white-washing of children's literature remains an incredibly widespread problem. In 2016, just 7 percent of the 3,200 children's books published in the United States featured an Asian protagonist. Compared to the 17 million Asian-Americans currently residing in the United States, the discrepancy highlights the blatant disconnect between our country's population and the stories deemed worthy by mainstream media channels.

Illustrated by Trisha Hautea in an eclectic mix of cut-outs and illustrations, Pepper Zhang is now slated to be the first in a series, and served as the inaugural book for Jerry's new publishing house, Little Ning Books. The mission of Little Ning is simple: "To create beautiful children's books starring Asian children."

Inspired? Of course you are. Pepper Zhang is currently available for pre-order, with delivery estimated in September 2017.