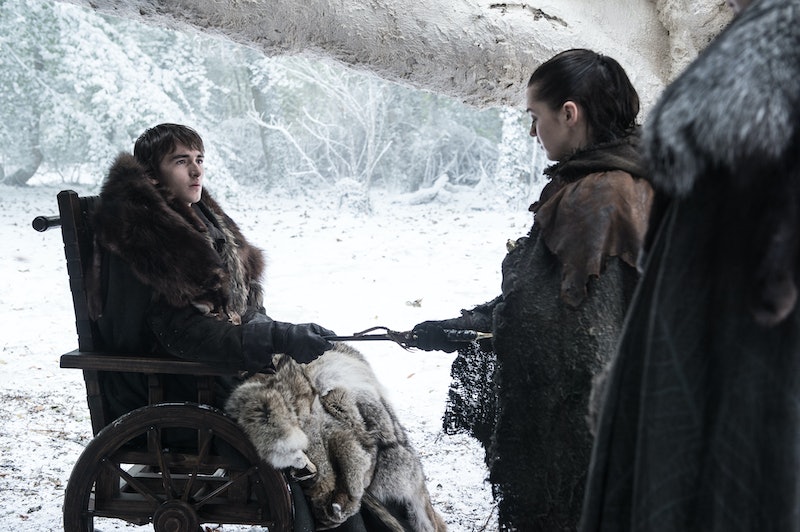 On Sunday night's Game of Thrones, a lot happened that might have distracted from a smaller moment earlier in the episode. Littlefinger's gift (and attempt to bribe) Bran on Game of Thrones went sour for a few reasons — not that I expected much more from a scene between the two creepiest men in Winterfell, but still. The Three-Eyed Raven is as uninterested in mysterious weapons as he is in hugging, being human, having emotions, and pretty much anything else. That's disappointing, because Bran likely has some useful information about that dagger's history. And, that encyclopedic knowledge could turn up information that the dagger is connected to the Night King on Game of Thrones.

In the episode, Bran pointedly asked Baelish if he knew who the dagger belonged to, seemingly implying that Bran already did. I know that Bran has seen it all, but from a storytelling standpoint, it would make more sense if he were referring to a vision that the audience had witnessed. I am thinking, of course, of the scene in which Bran watched the Children of the Forest sacrifice one of the First Men by tying him to a Weirwood tree and stabbing him with a shard of dragonglass, thus creating a White Walker.

Now, here's why the dagger and the Night King might be connected. First, Sunday's episode mentioned the Children and the First Men by way of some ancient drawings that Jon Snow showed Daenerys. If you weren't too busy marveling at how Jon has managed to find himself on another cave date, you may have noticed that his sexy story had some crucial holes in it. Bran learned that the Children created the White Walkers as a weapon against men. The walkers weren't always a common enemy. Leaf even told Bran that the Walkers were created because the children were being slaughtered by the men.

Second of all, earlier in the season, Sam casually flipped past a picture in a book of the exact dagger that Littlefinger gives Bran. The entry, if you look at the screengrab above, is about dragonglass being used to decorate Targaryen weapons, Valyrian steel, and Aegon the Conqueror. Could this mysterious dagger be decorated with dragonglass as well? How old is this thing?

Maybe the dagger originally belonged to Aegon, the first king of Westeros. Perhaps it even belonged to that guy who became the Night King, whoever he may be. According to George R. R. Martin's books, about 12,000 years passed between the First Men fighting the Children of the Forest and Aegon's conquest of Westeros, but if the Children have survived North of the Wall, I'm sure that their weapons have been passed down as well.

Then again, this could all simply be about the Season 1 attack on bedridden Bran that remains an unsolved mystery. It's just as possible that Bran knew his "benefactor" had the dagger all along, and that it was Littlefinger himself who arranged for the assassin. Maybe Littlefinger knew that his dagger would lead Cat to Littlefinger, no matter what the circumstances. Don't forget that it was Littlefinger who arranged for Lysa Arryn to poison her husband, Jon. Even though Littlefinger was doing it on Cersei Lannister's request, Jon Arryn died knowing the same incestuous secret that Bran was almost killed (twice) to protect. I definitely wouldn't complain if Arya put on a familiar face and killed Littlefinger with his own blade, to say the least.

All that said, it's possible the catspaw dagger's origins may not be directly connected to the Night King. But, with all those magical materials, it just might be worthy enough to take him down.