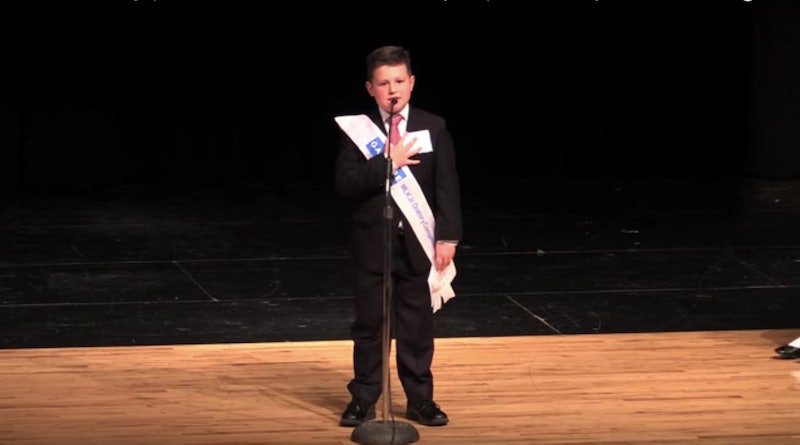 9-year-old Wesley Trent Stoker competed in and won the 26th annual Gardere Martin Luther King Jr. Oratory Competition in Dallas, Texas on Friday. Stoker, a fourth-grade student at Harry C. Withers Elementary School in Dallas, was one of a handful of finalists in Friday's competition, which was sponsored by Gardere Wynne Sewell, a Texas law firm. Stoker secured victory with an impassioned speech on the competition's assigned topic: "What is your dream for today's world?"

Stoker opened his speech by emphasizing that now, more than ever, it is imperative to take action to "do what is right" and address inequalities. As Stoker put it:

As the Washington Post reported, Stoker also seemingly acknowledged that he was the only white finalist in the competition, expressing the refrain, “I may not look like Dr. King. But I believe like Dr. King," several times throughout his oratory.

Stoker then went on to emphasize that his dream includes creating a world in which equality for all, peace, and love constitute the primary tenets. As Stoker noted:

I wish that all of our differences will be celebrated and that everyone felt included. I would like to see all people treated equally, feeling important and admired for their deeds. I wish there were no more wars. My dream is that everyone lives in a safe environment, loving and not hating each other. I feel that sometimes people don't try very hard to befriend people who are different from themselves, particularly those with different skin color.

Later in his speech, Stoker also spoke about the importance of being courageous and accepting, especially when it comes to loving others and standing up for those who face discrimination:

Dr. King encouraged many people to stand for what is right. We need to see everyone's inner soul instead of what is on the outside. My dream is that people would stop jumping to conclusions that would lead to quick judgements of others. I wish that adults would love each other like kids do ... I think that all people need to speak their thoughts if something bad is happening. If I don't speak up when I see someone hurting, then I'm hurting them too. Dr. King faced many challenges, but he stayed committed to his work. I wish that we all had the courage that he did ...

Stoker's moving words clearly touched many and propelled him to first place in the competition, something which, according to the Dallas Morning News, he was not expecting, considering the stiff competition. Remarkably, the competition also constituted Stoker's first-ever foray into public speaking

Gardere Chair Holland N. O’Neil commended Stoker and all of the other participants' contributions to the event honoring Dr. King, saying, “I want to commend the students on their knowledge of Dr. King’s impact and the talent they displayed today. They delivered well-crafted, emotional and insightful speeches that impressed the entire audience and judges."

Stoker's speech serves as a poignant reminder of Dr. King's crucial contributions to remedying racial injustices and inequality — and as a reminder that it is more important than ever to carry on King's legacy.