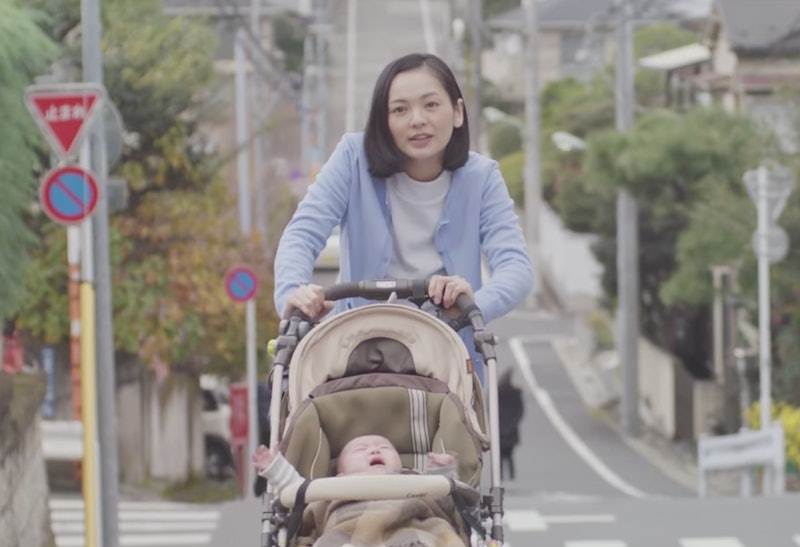 A Japanese ad for Moony diapers from Unicharm, titled “Moms Don’t Cry,” shows a new mom coping with the round-the-clock challenges of having a new baby, almost entirely by herself. The diaper commercial is coming under fire in Japan for its depiction of parenting, BuzzFeed Japan reports. While some viewers support the ad’s portrayal of motherhood, others have argued that it promotes a one-sided model of parenting in which mothers are the sole caretakers, while fathers sit on the sidelines.

The commercial depicts a mother with a new baby facing difficulties that are well known to new parents: Sleeplessness, the feeling of being overwhelmed, the inability to have a quiet moment. The mother rushes out of the shower to comfort the crying baby. She carries the baby against her chest as she hauls groceries. She rushes to eat with one hand while she tries to soothe her crying infant. At one point, she cries as she struggles to quiet her child. But interspersed with these moments are others in which she is happy, snuggling and smiling dreamily at her baby. The commercial ends with the slogan, “One day, it will be a precious memory” (translation via BuzzFeed).

It’s a sweet ad that shows how the trials of childrearing are balanced out by moments of joy — but critics have argued that something seems to be missing: The baby’s father. He appears in only a few seconds of the commercial, barely there, and never present to help with the mother’s constant caretaking.

According to BuzzFeed, Hiroki Komazaki, founder of a nonprofit dedicated to working and single parents, tweeted, “Don't glorify solo child-raising.” Another viewer described the commercial as a “Distressing flashback,” while another tweeted, “I felt nauseous.” Another viewer,however, praised the ad for having “positive and encouraging content for anyone who has to work hard alone.”

In a statement to BuzzFeed News, a Unicharm spokesperson responded to the criticism, saying, “It is never recommended for one person to handle all the child care.” The representative continued,

Because there are so many mothers suffering from the difference between ideal child rearing and reality, we wanted to cheer them on by portraying a realistic situation in the video. Our company’s wish was to keep cheering the mothers who want their babies to grow up abundantly and heartily.

We have received various opinions, but we do not plan to delete the video. We want many people to watch the video so more fathers would participate in childcare and more mothers would gain support from the people around them.

The commercial does certainly seem to emphasize the woman’s solitude, with multiple long shots showing her completely by herself, with the exception of the baby. Indeed, the only interaction she has with another adult in the 2-minute video is when she nods to another mother.

In many Japanese families, women do take on the bulk of childcare and domestic tasks. A 2014 study by the Organisation for Economic Cooperation and Development (OECD) found that men in Japan do an average of 62 minutes a day of housework (the lowest of the 34 countries studied), while women spend almost 300 minutes per day on domestic chores. And though Japan offers substantial paid family leave for both parents, only 2.7 percent of men take time off upon the birth of a child, and most of those leave for less than 2 weeks. BuzzFeed notes that the Japanese government has made a push in recent years for more gender parity when it comes to childcare and housework, and for more men to take family leave.

More like this
5 Crystals For Anxiety
By Megan McCarty
5 Crystals To Manifest Better Sleep
By Megan McCarty
Here’s What Sarah Jessica Parker’s Canned Cosmo *Actually* Tastes Like
By Emma Garza
What Is “Night Luxe?” Breaking Down TikTok’s New Aesthetic
By Courtney Young
Get Even More From Bustle — Sign Up For The Newsletter