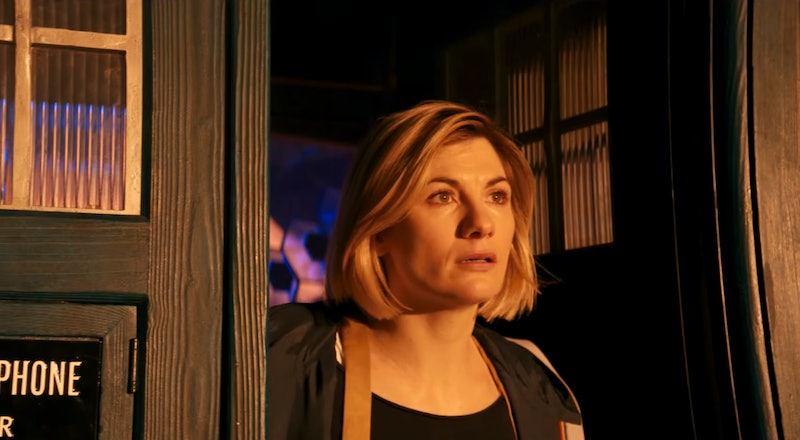 Something is coming for the Doctor... and for her fans. On Monday, Dec. 2, BBC America announced Doctor Who Season 12 will premiere Wednesday, Jan. 1 at 8:00 p.m. with a special two-part episode. The show will then settle into its usual Sundays at 8:00 p.m. timeslot on Jan. 5. Details about the premiere are still scarce, but in the new trailer, the Doctor is adamant that a crisis is coming — "a big, serious crisis."

If you want to see that crisis unfold on the big screen, then you're in luck. Per TVLine, BBC America and Fathom Events are hosting a one-night only screening of the season premiere and the second episode on more than 600 cinema screens nationwide. The simulcast will be followed by a live Q&A event featuring Jodie Whittaker, Tosin Cole, and Mandip Gill. Tickets for the event go on sale Friday, Dec. 6.

Additionally, BBC America will host a Doctor Who takeover in the week leading up to the premiere. Expect to see episodes and specials featuring all of the modern Doctors from Christopher Eccleston to Whittaker. And as an added bonus of classic Whovian goodness, the network will also air animated "lost episodes" titled "The Macra Terror" on Thursday, December 26th at 9 p.m. EST.

In the meantime, fans can look to the trailer for clues about what lies ahead for the Doctor and her companions — Ryan, Graham, and Yasmin — this season. The new footage once again teases the return of the Cybermen, but it also offers up a first look at this season's special guest stars, including Stephen Fry and Timeless star Goran Višnjić. Both characters look potentially menacing, particularly Višnjić's, who is rocking a classic bad guy mustache.

Since the 13th Doctor took over the TARDIS, she's largely dealt with new foes, with showrunner Chris Chibnall preferring to allow Whittaker's character to chart her own unique path across the universe. However, she did have a run in with the Daleks during last year's New Year's special, and her upcoming encounter with the Cybermen will continue the tradition of keeping the Doctor grounded in the show's rich 50-years and counting history.

Just don't expect these Cybermen to be the ones you're used to. In the trailer, they appear to be rusting as if they've fallen into disrepair, and this goes a long way toward making them even more menacing than usual. In a recent interview with Radio Times, Chibnall revealed the classic monsters are getting a modern twist in Season 12. "Cybermen feel like an important part of the rogues' gallery and we've done something slightly different with them this year — there was a particular story I wanted to tell," he said. "They're just relentless, the Cybermen. They just don't stop."

They may be relentless, but they haven't been a true match for the Doctor yet, and crisis or no crisis, she seems more than prepared to take on whatever the galaxy throws at her and her friends in Season 12.

More like this
Everything To Know About 'RHONY' Season 14
By Jake Viswanath, Alyssa Lapid and Brad Witter
'Succession' Season 4 Will Be An "Absolute Banger" According To Cousin Greg
By Bustle Staff
Netflix Shut Down 'Bridgerton' S3 Rumours About A “Very Dark” Storyline
By Bustle
6 'Happy Valley' Easter Eggs You May Have Missed
By Sophie McEvoy
Get Even More From Bustle — Sign Up For The Newsletter
From hair trends to relationship advice, our daily newsletter has everything you need to sound like a person who’s on TikTok, even if you aren’t.