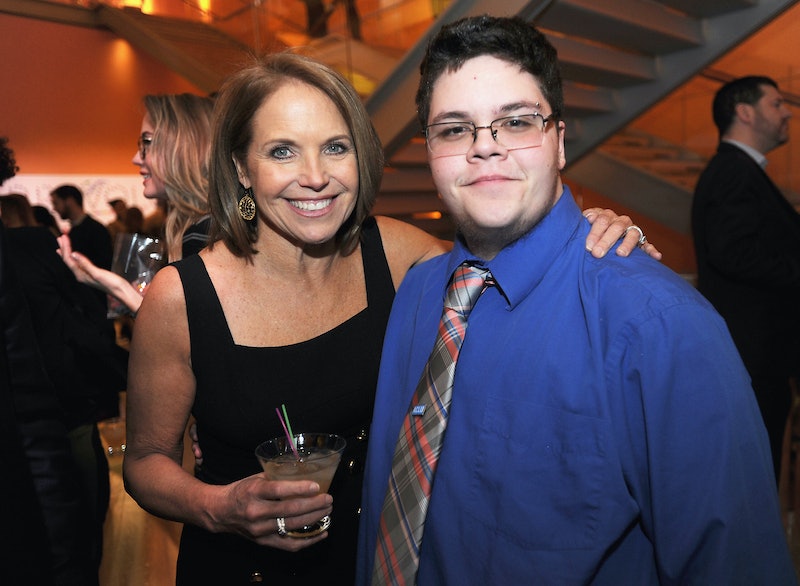 Storytelling has the ability to not only educate and even entertain, but also to build empathy and bridge the gaps of human experience. National Geographic's new documentary, Gender Revolution: A Journey With Katie Couric, which premiered on Monday, is fully aware of this power. To its credit, Gender Revolution leans heavily on firsthand accounts in order to educate and galvanize the public about the LGBTQ movement, and especially the latest battles over transgender rights in America.

The documentary follows Couric as she travels across the country, speaking with doctors, intersex activists, school teachers, psychologists, and most importantly, genderqueer, nonbinary and trans people of all ages about their own experiences.

One of the young trans people Couric spoke with in the documentary is Gavin Grimm, a 17-year-old transgender male student from Gloucester High School in Virginia who spoke before his school board about his right to use the bathroom. Originally, the principal and school board acknowledged his gender and he was fully integrated. It wasn't until parents in the community started complaining, even threatening to get school board members fired, that he was forced to advocate for himself.

The school board ruled that Grimm couldn't use the men's bathroom, but would be permitted to use the unisex bathroom. This decision was made nearly two years ago. His case, G.G. Vs. Gloucester County School Board will finally go to the Supreme Court on March 28, making it a landmark case for trans students.

A clip in Gender Revolution shows Grimm speaking before the school board, poised and intelligent in the face of ignorance:

I have been aware of who I was since I was a very young kid and it’s taken me a very long time to be able to be myself and be OK with that. The person that I am now, being able to have all of my rights in full, is such a massive, dynamic difference from the person I was just last summer. If the evidence said that me using the boys’ room would be catastrophic, I would not be advocating for myself.

The story of Grimm, and more specifically the clear way in which the Supreme Court case could affect trans lives for generations, has been at the center of the transgender bathroom debate the past two years. In fact, it was Grimm's face-off with his school board that spurred the Obama administration to issue a federal transgender bathroom order in 2016, demanding schools allow children to use the bathroom corresponding to their gender.

During the film, Couric broke down the differences between trans, genderqueer, gender non-conforming, and the fluid lines of gender play in accessible ways that could reach presumably cis heteronormative audiences previously ignorant to gender terminology. That in itself made the documentary a great tool. At the same time, I could see the potential for the LGBTQ community to find her approach reductive and voyeuristic in ways.

However, in a time where trans identities are constantly presented as an abstraction through the lens of lawmakers who refuse to acknowledge people's lived experience, the platform that Couric lent to Grimm and other young transgender people to tell their stories was a notable step in the right direction.