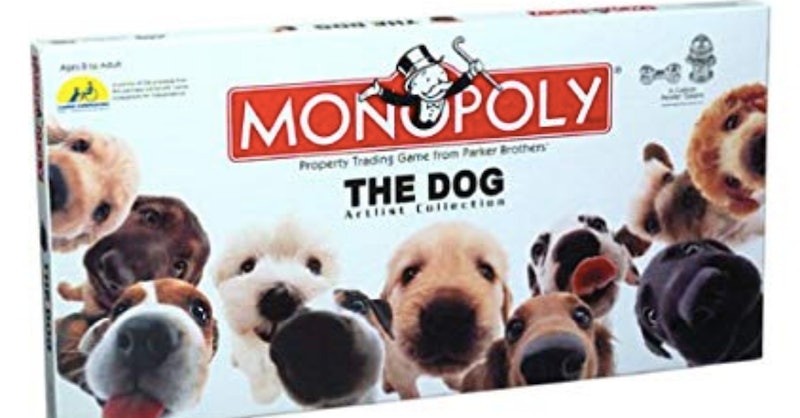 If you're looking for a gift for a dog-loving board game fan, the exact perfect thing exists in the form of a dog Monopoly game. There are a lot of themed Monopoly games out there, but unless you're a collector, you probably haven't really thought much about the fact that one for pretty much anything exists. Pizza Monopoly Stranger Things Monopoly. Christmas Monopoly. Sure, some of them aren't from the official brand, but if you want Wine Monopoly, (or Wine Not-Technically-Monopoly, rather) that's just a sacrifice you have to make.

The existence of dog Monopoly was pointed out by a website called Useful Tips, and I guess dog Monopoly being a thing is useful. The version of dog Monopoly the site is talking about is called Monopoly The Dog Artlist Collection. The Dog — Like, "The Dog", capitalized. Not "a dog" — is something you may be familiar with.

According to its website, "THE DOG is the highly successful puppy photography franchise from Japan. Launched in 2000 as a collection of calendars and postcards, these adorable images took over the store shelves and became an instant hit with collectible plush, T-shirts, stationary and so much more." If you've ever seen products featuring fisheye lens photos of puppies, they're probably from The Dog. So, this particularly dog Monopoly game is part of a collaboration with The Dog. It was made by USAopoly with licensing from Hasbro.

The Dog Monopoly isn't for sale new anymore from big retailers, but used versions are available on eBay and Amazon, and Amazon seller Jeannie's Treasures has a new game listed. The site Fusion Toy also has six games available as of the time this post was published, but one will run you about $100.

But for those who want a dog Monopoly — Like, any dog. Not capitalized —, there are other versions. Check it out.

Late for the Sky Dog-Opoly
Amazon

This Dog-Opoly game is not from Hasbro, but it does have "all the fun of the traditional 'Opoly' game with some great doggie twists." And, really, isn't that all you're looking for?

Like the game above, this more specific version is also from the brand Late for the Sky. They also have Golden Retriever, Pug, Bulldog, and more

This Theme Pack lets you change a Monopoly game that you already have into a dog-themed version with new game pieces and money.

This special edition Monopoly collaboration with Pedigree can now be found on eBay.

Late For The Sky Mutt-Opoly Board Game
Target

Finally, one more from Late for the Sky. Mutt-Opoly is "a game celebrating the world's most popular dog." The game board is covered with a wide variety of dogs to adopt, which is very cute.

So, if you want to play a dog version of Monopoly yourself or give it as a gift to someone else, there are plenty to choose from. And there's no need to spend a ton of money on that now pretty rare The Dog version.