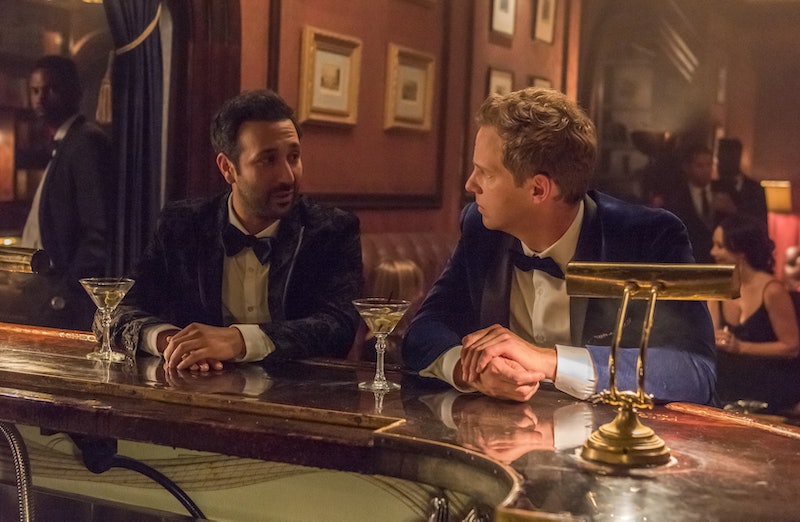 Edgar may have been a human doormat when we first met him, but throughout You're The Worst's final season, he's slowly started to become more independent and less reliant on others' approval — especially Jimmy's, which has been the hardest for him to shake. In the March 27 episode, that culminates in him telling Jimmy some harsh truths that may have destroyed their friendship, but it's a testament to how much he's grown. And it also shows that Edgar knows being a good friend sometimes means saying what no one else will.

The day before Jimmy and Gretchen's wedding, Edgar's mission to show his BFF one last great night on the town is a rousing success. They go curling, hit up a rage cage, and have fancy cocktails at a private club with comedian and Verizon spokesman Thomas Middleditch. But then Edgar, after hearing Jimmy celebrate him — a rarity for him — decides to get something off his chest that proves just how much he cares for Jimmy. Genuinely concerned for both him and Gretchen, who's been visibly struggling with this next chapter of her life, Edgar tells Jimmy that the two shouldn't get married because they're going to "destroy each other."

"Don't marry her. You told me not to lie to you and the truth is you can't do it. You can't marry Gretchen," Edgar confesses. "Even when you tell each other the truth, you don't do anything about it and you just end up hurting each other ... You love each other but that's not the same thing as being good with each other." Edgar even put in the legwork to figure out how much of his deposit Jimmy could get back if he cancels the wedding — that's how seriously he's taking it. But Jimmy isn't having it. "We are done. I don't want to see you ever again," he shoots back, and Edgar leaves.

With only one episode left, it seems like this really could be the end of their friendship. It's clear that Jimmy doesn't like what Edgar is telling him — and fairly so, Gretchen is his fiancée — but he's also not used to Edgar pushing back against him. He's always had the upper hand in their relationship, and having Edgar disrupt that must, on a deeper level, feel like a punch to his ego. It's possible Jimmy has even realized himself that he and Gretchen shouldn't be together (remember that uneasy look he had after she confessed how hard of a time she'd been having?), but doesn't want to hear that validated by someone he considers somewhat of an inferior.

You're The Worst has a lot to say about relationships, but this moment seems to suggest that while providing comfort and reassurance in a friendship is good and important, it's just as critical to have friends who will tell you like it is — especially if you're making as many bad life choices as the people on this show. Saying the hard thing isn't easy, but when it comes to something as momentous as getting married, sometimes it's necessary. Your friend may not choose to take your advice, but really, truly being there for someone means you're willing to take risks for them — even if that means risking the friendship itself.

More like this
What’s New On Netflix: Ana De Armas’ 'Blonde' & A Nick Kroll Special
By Arya Roshanian
The 'Reasonable Doubt' Cast Includes A 'Save The Last Dance' Reunion
By Grace Wehniainen
'Elite' Season 6 Is Arriving Sooner Than You Think
By Gretchen Smail and Grace Wehniainen
Nicola Coughlan Shared A Lady Whistledown Excerpt From ‘Bridgerton’ Season 3
By Grace Wehniainen, Alyssa Lapid and Sam Ramsden
Get Even More From Bustle — Sign Up For The Newsletter