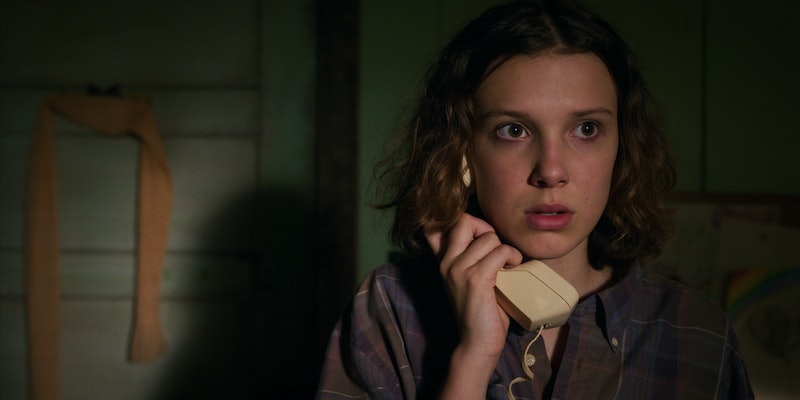 Stranger Things is known for its cliffhangers at the end of each respective season, but Season 3 went beyond the call of duty, leaving the fate of Jim Hopper up in the air. Speculation over his presumed death has run rampant online, but it isn't the only theory fans have zeroed in on. In fact, there's one Stranger Things 4 theory about Eleven that has gained some serious traction over the last few months and if Millie Bobby Brown has anything to say about it, it could definitely come to fruition when the show returns.

In Season 3, Eleven faces off against the Mind Flayer monster and ends up getting injured, resulting in a painful-looking cut on her leg. The Mind Flayer appeared to be working its way into her system, but was ultimately cast out of her through the use of her powers — or so fans are being led to believe. But what if part of the Mind Flayer remains in Eleven even now? The theory posses the possibility that the Mind Flayer may have infected Eleven and will turn her into the Season 4 villain. Considering that the character has been the pivotal hero since the show's inception, it would definitely be a very strange turn of events.

During a recent interview with ELLE, Brown claimed to have no idea what the next season will have in store in regards to Eleven's fate, but upon hearing about this Mind Flayer theory, she confessed that she'd jump at the chance to tackle such a compelling plot twist.

“I kind of like it! I’m into it," she told the outlet, though that wasn't the way she'd portrayed the character at the end of the season. "I wasn’t playing it like that. “In scenes after the Mind Flayer grabbed me, I wasn’t playing it as I was infected. I was definitely playing it as normal as possible." Though she wouldn't put it passed the Duffer Brothers to keep something like that from her in order to get a more genuine performance from her. "Maybe that’s the reason they didn’t tell me," she added. "To make it as real as possible.”

Typically she tries not to listen to all the different theories floating around, but when it comes to this one she's equal parts intrigued and terrified. "What if she is the villain? That would be so cool. Wouldn’t that be cool?" Brown continued. "I’d love to be the villain, but then I also wouldn’t because Eleven is perfect. It would suck.”

Of course, Brown could just be messing with fans' minds right now so as to keep everyone on their toes. Back in May, the 15-year-old actor told Digital Spy that she already knows how the series will end. "I know exactly what happens," she stated, while adding that it makes her feel "very scared."

Could that be her subtle way of hinting at the dark path Eleven may be heading down? Stranger things have been known to happen.