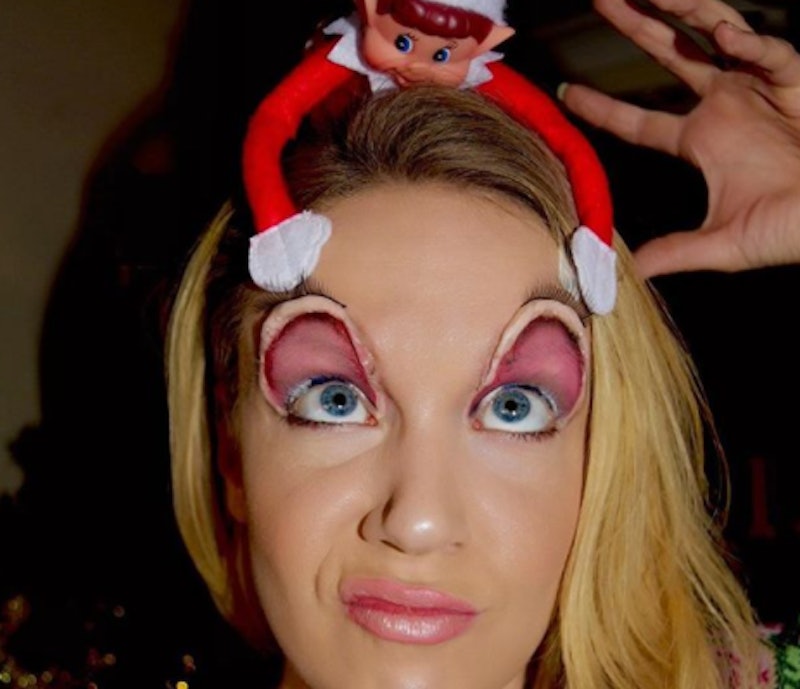 When you think of holiday makeup, chances are you think of glitter eyelids, flashing red lips, and deep plum or raspberry shades. It's not often that you think of peeled back eyelids, stretched out jaws, and hair on fire. But with makeup artist @Zoe-artistsharvest's Elf on the Shelf makeup looks, that's exactly what you get.

When it comes to the story of Elf on the Shelf, the little doll is meant to let Santa know what mischievous antics kids are getting into while he's not looking. He's like St. Nick's snitch, if you will. Parents place the elf around the house each day, and he watches who's misbehaving. As you can imagine, some people think that's rather creepy, and that's where the UK-based makeup artist's idea came in.

The elves are notoriously naughty, getting into shenanigans around the house, like rolling down the stairs in a roll of toilet paper or getting stuck in the ice machine in the fridge. So Zoe thought to incorporate that impishness in her holiday-inspired look.

She created four looks where the elf is tormenting her. In the first, he's pulling back her eyelids. In the second, he's hanging off her jaw. In the third, he lights her hair on fire — and is cheekily sitting on her shoulder with a lit match. Finally, in the fourth, he wraps her face up in a ribbon. Naughty, indeed.

For the first look, where the elf is pulling back her eyelids, she captioned, "It's that time of year again, time to literally keep your eyes peeled for those naughty little elves."

Her tutorial doesn't only deal with eyeshadow palettes and contour tricks, but it also involves SFX makeup. In the caption she listed all the different products she used, and that includes synthetic wax to make the cartoon-like eyelids, and body paint to create the shading and lid coloring.

In the second look, the mischevious elf is hanging from her bottom lip, stretching it out to exaggerated proportions. This one looks a little more complex, where the artist created a fake tongue and painted-in teeth. Called the "Jaw Dropper," here she disguises the bottom lip as part of the tongue, and uses her three-dimensional painting skills to create the rest.

In the third Elf on the Shelf look, we have the sneaky guy lighting her hair on fire. This example allowed her to experiment with more traditional makeup, since the fire headband piece had nothing to do with her face. Dubbed "The Twisted Fire Starter," she apparently got the idea after she singed her own hair when she leaned over a candle and misjudged the length of her tresses.

If you feel like the fire looks too life-like for comfort, Zoe wants you to know you don't have to worry. She explained in her caption, "This is 100% makeup and paint but I used a little blurring tool to help the illusion of the fire along." Good to know.

The last look has to do with being tied up in knots. If using synthetic wax seems too advanced for you, you might feel more comfortable trying out this look. Using face paint, she created a three-dimensional illusion of a satin ribbon being wrapped around her face, and tied into a neat bow at her forehead. The elf is sitting on her shoulder, with the end of the pink ribbon in his hands.

With the help of shading and white outlining, it looks like there is a real ribbon rippling across her face.

While these aren't necessarily makeup looks that you would want to wear out on the weekend, they do prove that makeup isn't only for enhancing your features. It's also art. And there's a lot of really cool things you can do with it — especially if a naughty elf is involved.