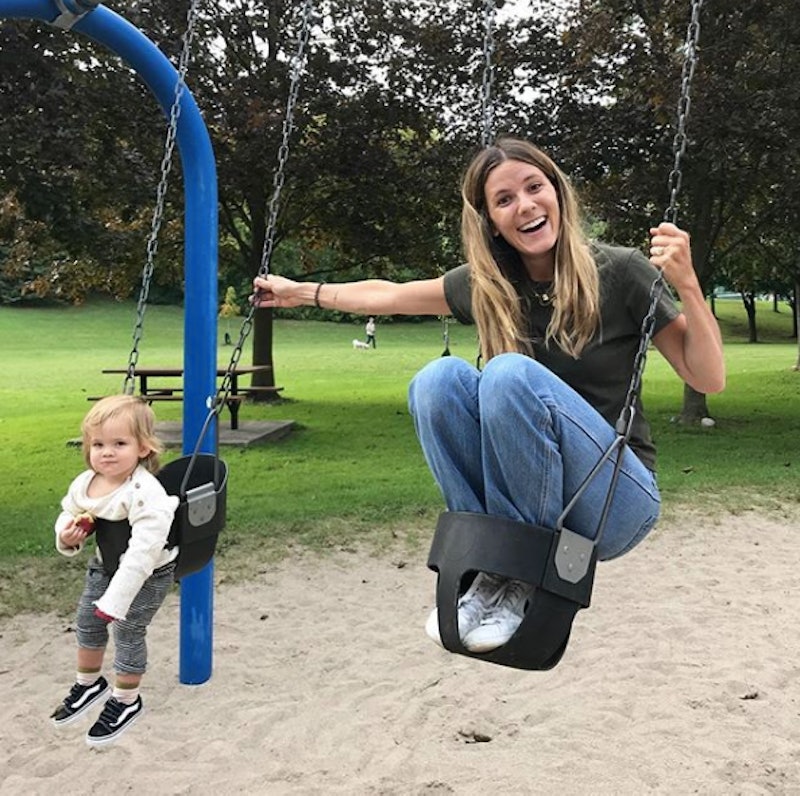 Eden Grinshpan, host of Food Network’s Top Chef Canada, is all about cooking with flavors she feels a connection with. Her restaurant DEZ, a fast-casual Middle Eastern eatery she opened with by Chloe. founder Samantha Wasser in 2018, features an entire menu inspired by Grinshpan’s Israeli heritage. Grinshpan says she got an early taste for cooking — and for the flavors that would later influence her career — watching her mother in the kitchen growing up. Now, there’s one recipe in particular she’s excited to pass down to her own daughter.

I grew up in Toronto, Canada. Every holiday — it didn't need to be Passover — my mom would make chicken soup with matzo balls. I don't have one specific memory of her doing it. I just always have this vision of my mom making the chicken soup, letting it cool down, and then literally picking the chicken carcass to get every little shred of meat off it. So when I think about my family's holiday food traditions, that's what I think about — the prep.

My mother probably picked up the recipe from her mother. Chicken soup is something that is passed down from generation to generation in all different cultures. But obviously, chicken soup with matzo balls is very Jewish, and it's something that Ashkenazi Jews especially have been making forever. I don't even know if my grandmother actually taught my mom the recipe. My mom probably just learned it from watching her.

I used to love getting in the kitchen and watching my mom cook. She had solid recipes that we grew up eating and really, really loved. I have strong memories of both my parents cooking in the kitchen. I was very fortunate to have dinner with my parents every night while growing up. There was a lot of food in our house.

I'm half Israeli. I lived in Israel for a couple of years, and have gone to Israel almost every summer of my life. I always loved the food, but I never necessarily focused on cooking it that often. At home I would bake a lot, and I would dabble a little bit with Middle Eastern food, but it wasn't necessarily what drove me. When I moved to Israel when I was 21, that's when things started to really spark. Then, I would say probably five years ago, I just started realizing that the only things I wanted to do, and the only flavors I wanted to pick up, were more Middle Eastern. It's like I woke up one morning and couldn't think about making any other food. And it was so wild, how I really felt like I had found my culinary voice. I look back now at how it was instilled in me at such a young age, I just didn't recognize it. I grew up around it, it was my norm, and I never thought about it. Now, it feels like such a natural thing for me to integrate into my everyday life. I find that connecting to that side of myself feels just right. That's who I am to the core. I really connect with the culture. I connect to the people, and I just always want to embody that energy. So I think that cooking the food, eating the food, really helps me do that.

I still make my mom's chicken noodle soup now — it's my husband's favorite thing. He comes home, and when there's a pot of chicken soup, he's like, "My life is made." For me, it's the biggest compliment. It's something I started doing early on in our marriage, and I'm definitely going to continue doing it. I think a solid chicken soup for any household is mandatory. It's just so comforting. It makes you feel good. I make mine pretty peppery, so it clears your sinuses and makes you sweat a little while you eat.

My daughter is only 19 months, but she's really starting to understand what we're saying, and wants to be involved with everything. I totally see myself getting one of those really cool stools that you can put beside you while you're cooking, and when she's older, she's going to be making her matzo balls, or cutting her carrots. I want her to get her hands dirty. I want cooking with her parents to be a really strong memory for her. Food is the soul. It's the heart of the family, it's the heart of cultures — everything. It's what keeps us alive. Absolutely she will be cooking with me — if she wants.

As told to Bustle's deputy lifestyle editor Kathryn Kattalia. This interview was edited for length and clarity.