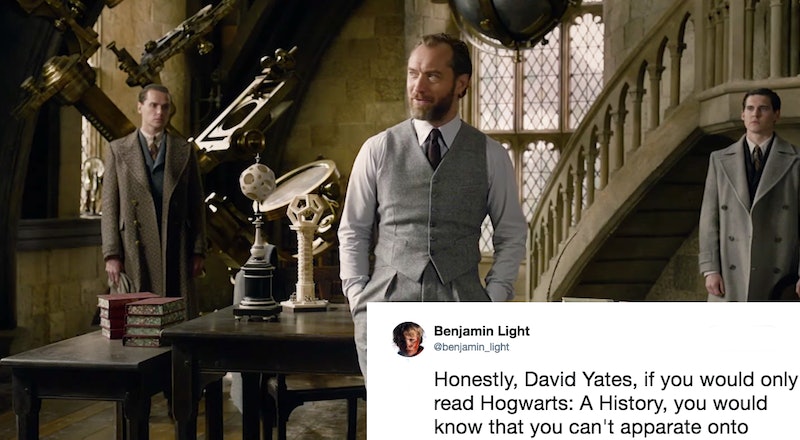 It's always exciting to feel like you're enough of a Potterhead to catch slip-ups within the franchise. But, as it turns out, the apparent Apparition plot hole in the Fantastic Beasts 2 trailer might not actually be an error at all. Yes, there are rules about Apparating onto Hogwarts grounds, but there are also rules for when and how you can break them. And they're rules that were set in place by J.K. Rowling, before any of this controversy arose. Basically, no magical realities have been broken during the making of this feature, and you can breathe a sigh of relief.

But first, let's talk about how this confusion started, because it is pretty legitimate. The trailer for the Fantastic Beasts follow-up, subtitled The Crimes of Grindelwald, was released on Tuesday, and fans were quick to spot a potential error. The clip begins with a long, swooping establishing shot of Hogwarts School of Witchcraft and Wizardry. And just when it's crystal clear exactly where this story is taking place — about 10 seconds in — three dark-robed figures materialize on one of the long stone walkways leading up to the castle.

They're clearly Apparating, which does present a bit of a hiccup, because of a rule of the magical universe that's been drilled into the heads of readers and watchers more than almost any other. Do your best Emma Watson as Hermione Granger impression and say it with us: "You can't Apparate on Hogwarts grounds!" (You can even add a "How many times do I have to tell you?" in front of it, if you're feeling especially fed up.)

Rowling spoke to the rule in a Pottermore excerpt fleshing out the backstory of the Hogwarts Express, in which she listed ill-fated attempts of getting onto campus that students had made over the years. She wrote: "Some attempted to Apparate (often with disastrous effects, as the castle and grounds have always been protected with Anti-Apparition Charms)."

So, given that knowledge, how is it that the trailer so casually showed three individuals pretty clearly Apparating onto Hogwarts grounds without experiencing any adverse effects? While we won't know the exact context until the full movie is released, there are plenty of situations that would allow for a rogue Apparition or two. (Or three.) After all, a loosening of the rules is referenced almost in passing in Harry Potter and the Half-Blood Prince. Sixth-year students are entitled to take a class called Apparition from a Ministry-Apparition Instructor named Wilkie Twycross. His class is stated to include practice periods in the Great Hall, during which the protections are relaxed. As he said:

"As you may know, it is usually impossible to Apparate or Disapparate within Hogwarts. The Headmaster has lifted this enchantment, purely within the Great Hall, for one hour, so as to enable you to practise."

So, basically, it's up to the judgement of the Headmaster. If we see people Apparating onto campus in the trailer, it's safe to assume that it's because they've been allowed to do so.

If you start to think about it, we've actually seen the Anti-Apparition Jinx relaxed in both the books and the movies outside of this one time. In Harry Potter and the Deathly Hallows Pt. 2, Draco Malfoy is able to Apparate to the Dungeons, and Harry and Dumbledore are able to Apparate to the Astronomy Tower. This takes place during the Battle of Hogwarts, which has led many to speculate that Voldemort and the Death Eaters were somehow able to disable the Jinx once they took the castle.

So, while it speaks highly of any Harry Potter fan who spotted those Apparitions onto Hogwarts grounds and called foul, there is a reason for it.