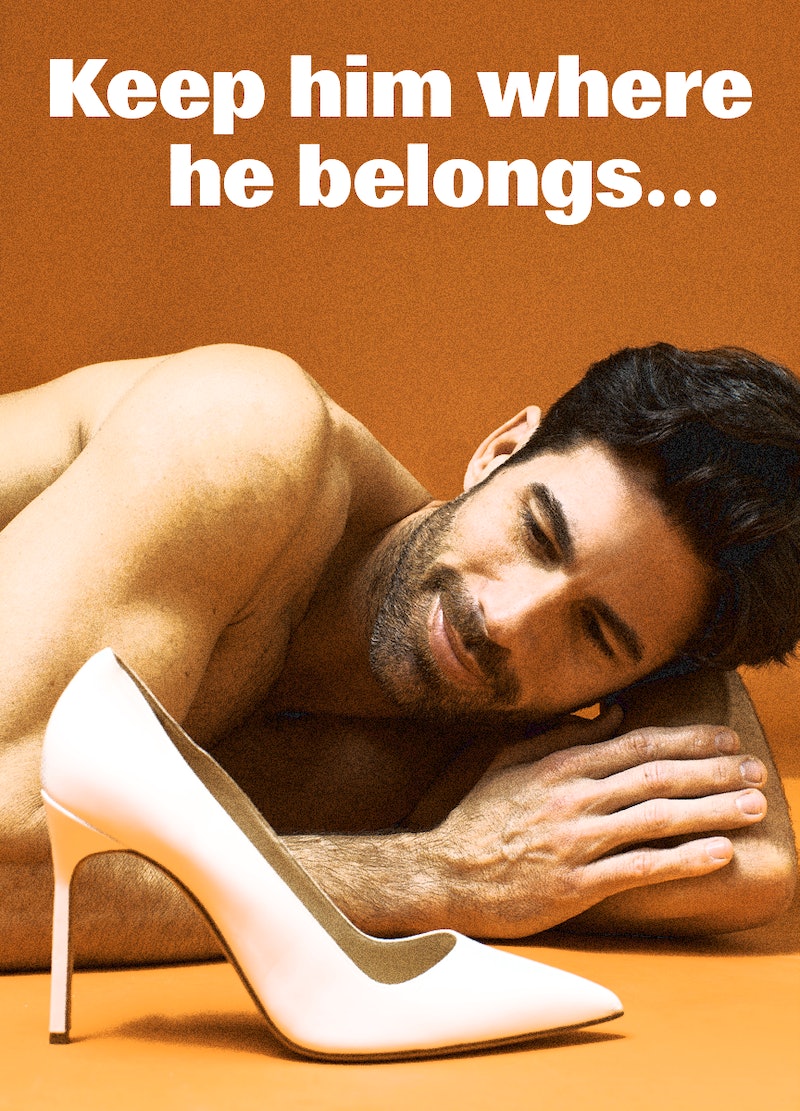 You've definitely heard that a picture is worth a thousand words. So why has no one ever thought to combat sexism using that axiom? Enter Kamie Crawford and Nicholas Ferroni, a pair of activists armed only with some terrible old advertisements and a flare for Photoshop. Shot by Christopher Horne, these reimagined sexist 1950s ads do a terrific job of using the absurdity of the old ads to really get you thinking about how prevalent sexism still is in society.

Crawford, a TV personality, and Ferroni, a high school teacher and activist, have combined their longstanding dedication to the feminist cause with this campaign. They both recognize that there's a lot of work to be done. "As much as we like to think we're living in a society where equality is valued, the sad truth is that misogyny is currently governing our country," Crawford tells Bustle via email.

On the other hand, Ferroni comes at it from a perspective granted to him by his profession. "As a history teacher, I can honestly say that history continues to repeat itself," he says. Politics, of course, were also part of what got him thinking about the issue. "With the current political climate, it seemed very relevant that sexism is very alive and even proudly accepted," he adds.

What they've done, therefore, is simply take magazine ads from the 1950s and entirely switch the genders. Ferroni takes the original woman's place in the photos, and every time an ad said "wife," it became "husband" in the new version. Sounds simple, right? It is — and that's exactly what's so striking about it.

"We may know that something exists or a system is unfair, but it doesn't truly hit us until we actually see it in practice or are put in the position of the group that is being oppressed or discriminated against," says Ferroni, explaining their motives behind the idea, and Crawford agrees. "I think that reversing the roles and really empathizing with how it feels to walk in another persons shoes is the best way to have a true understanding of one another as people," she says, and that's really at the heart of all of their photos.

Both of them emphasized that the purpose of their reimagined ads wasn't to suggest that men should somehow take over the "traditional" women's role. "The purpose of this campaign was to make people really think, 'Wow. These old ads are ridiculous — and the reimagined ads are funny, but still ridiculous!'", says Crawford. "Inequality isn't cool no matter what gender, race, age, etc. you are," she goes on.

"These ads are not intended to demean men, but to just put things in historical context by showing the polar opposite," says Ferroni, adding that the original versions were in print not so very long ago.

The fascinating thing about them is that while the sexism is certainly evident in the old ads, the gender-swapped versions are far more jarring. Ads making use of women's bodies and their traditional role in the household have been ubiquitous for years — but besides the occasional men's underwear ad, it's rare to see men put into the same position.

The goal of the ads, then, is to get the world to the point where it's just as jarring to see sexism against women as it is to see it against men. It isn't an easy thing to do, but Ferroni recognizes that. "We must be active to be activists, and campaigns like this will open some people's eyes and probably offend others, because the truth always hurts," he says.

"I hope that women see how empowering it can be to take something that was meant to hold us back and use it as an empowering moment," says Crawford. "I hope that men still feel empowered and continue to be the amazing men that they are — but that they never forget how equally amazing we are too."

This is a step along the road to equality — and a very entertaining one at that. However, that's exactly what makes it so effective. Learning to think differently is never an easy process, but Crawford knows exactly how to sum it up: "Overall, I hope that everyone can agree that whether you're in a loafer or a stiletto — the shoe does not feel good when it's on the other foot."