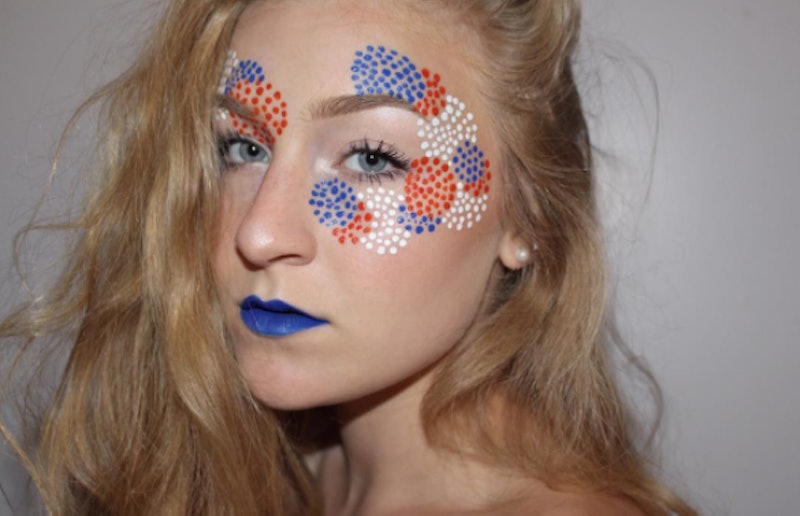 Part of the appeal of the July 4 (other than all the hot dogs and beer) are the wardrobe choices we dabble in — from red, white, and blue themed rompers and shifts, wacky sunglasses, and blue lipstick, it's super fun to dress in theme. But the fireworks makeup trend is about to throw that idea onto a whole other level — why just show up to your barbecue wearing red lipstick or blue shadow, when you can have a whole bloom of fireworks taking over your face?

It might sound aggressive, but it's super chic and tasteful. The genius behind the look is Katie Bright, or @doseofdynamic she's known on Instagram, an 18 year-old aspiring makeup artist. In order to make the idea more minimalist and clean, she decided to create the bursts of light with carefully stenciled dots. "Inspired by the dot eye makeup trend, she created spots of liquid lipstick and eye shadow all over her face to look like fireworks," Allure reported. The pattern circled around her eyes and trailed across her cheek and brow bones — and even dipped down to her eyelids. While it might seem intimidating at first, the tutorial on her Flipgram proves that it's super doable.

In it, she revealed that she used the end of a makeup brush to create the dots, dipping it into blue, white, and orange liquid cosmetics (though feel free to swap orange for red if you want.) As for planning where each firework burst went, it looked like she first created the outer outline of the circle, and then filled it in with dots. "For the rounded shapes of each shade, Bright traced out the outline of each section first before working her way inward with the dots. It looks pretty simple," Allure explained.

This will definitely make quite the impression at your Independence Day party, even if it ends up just being you sitting on a rooftop and watching the night's display. It almost looks like a stenciled-on mask, which definitely adds more drama and oomph to any outfit. If you're craving something over the top for The Fourth, this is a great option!