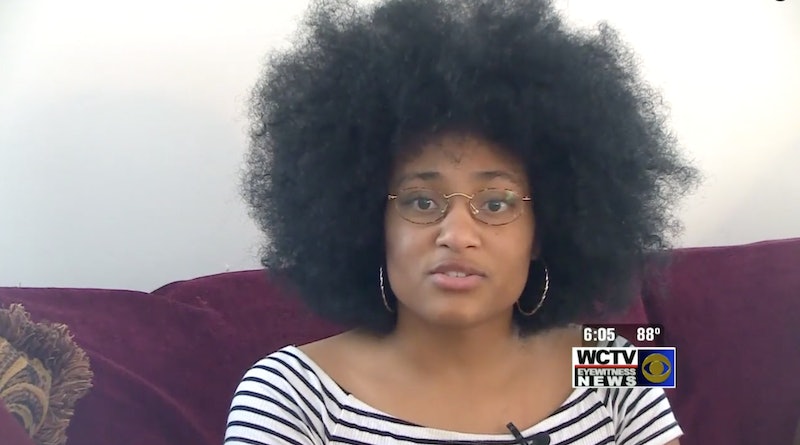 According to WCTV, 17-year-old Jenesis Johnson's afro brought up a debate about whether it was "big and outrageous or bold and beautiful." But the real question is, why is this even a debate? It may seem surprising that Jenesis Johnson was called to the assistant principal's office after a teacher began asking questions about her afro, but this is far from unheard of. In fact, just last month Deanna and Mya Cook were called to the office for a "uniform infraction" and were told to remove their braids, according to The Washington Post. And when Marian Reed's daughter was called out of her physical education class and told that her hair was "unacceptable," her nine-year-old was also sent home. Bustle has reached out to Jenesis's school, North Florida Christian, for comment, and will update this post upon response.

In regards to Jenesis's story, a WCTV anchor mentioned that "We know hairstyles especially for high schoolers can make a statement" — but what happens when that "statement" is a normal extension of who you are? Better yet, this is a reality that many black women face. While our hair can be considered a "bold" statement, but this eleventh grade student, according to WCTV, has been wearing her hair this way for the past seven months. So the real debate here is the following: Is this just about hair?

What if your hair was a heavily politicized space even when you don't want it to be? And what if you're told that embracing it in any way made you "extreme"? Welcome to Jenesis's world, a world shared by many other black women. Hair bias, unfortunately, is a reality, and in 2016 a study confirmed that black women are judged more harshly depending on how they wear their hair. An online study by the Perception Institute called the Good Hair Project incorporated over 4,000 participants who were shown the same pictures of a black woman with different hairstyles. Each participant was prompted to rate each photo from 1 to 5 based on how they thought people in the U.S. generally felt about each style. According to the results, "On average, white women show explicit bias toward black women's textured hair."

For women like Jenesis who wear their hair in an afro, the study also substantiates her feelings of being targeted. According to the results, "Black and white women perceive that the US rates the afro similarly low on professionalism," and white women's perceptions rated between 2.4-2.5 out of 5 about the afro being "sexy" or "beautiful."

But Jenesis's response to the school allegedly saying that her hair needed to be "fixed" is powerful because she selflessly puts her experience into context; she expresses that she isn't alone.

"It hurts me. It's hurting me. For my people behind me, the younger ones, they're going to have hair like me. Why can't they wear their natural hair?" she said to WCTV.

Jenesis also said that she sat in the back of the classroom just so that her hair would no longer be a distraction. But this wasn't enough. According to WCTV, her school, North Florida Christian, allegedly told Jenesis and her mother that she could finish the school year wearing her hair. However, if her hairstyle didn't change, then their money would be refunded for the following semester.

So going back to my first question: Why does this matter? Why would Jenesis' afro matter? Well, it's complicated. Imagine trying to embrace yourself (hair, skin, or otherwise) when society often tells you that you can't; or that you have to alter your appearance just so that you can, say, learn without a controversy. The bias outlined by the The Good Hair Project is often acted out in ways that disempower young women like Jenesis early on, especially because of her texture.

This is far from the only controversy black women have to deal with in regards to owning their hair; this is also why women like Solange have decided to release singles like "Don't Touch My Hair." Even when it is rated or perceived as more "acceptable," you are not immune to questions, and the ever so irksome touching.

The student handbook at North Florida Christian states, "No faddish or extreme hairstyles. If hair is dyed, it must be a natural color. No permanent or ornamentation may be worn. Hair should be neat and clean at all times. The administration will make the decision on questionable styles."

To assert that Jenesis broke this rule in any way also emphasizes negative stigma about black women and their natural hair; that it's still "taboo," "ugly," "unprofessional" or even "dirty."

The question that Jenesis asks is absolutely correct when she responds to the controversy. Why should girls like her bear the burden for embracing who they are? The answer should be, "They shouldn't," and a student handbook or policy should acknowledge that.