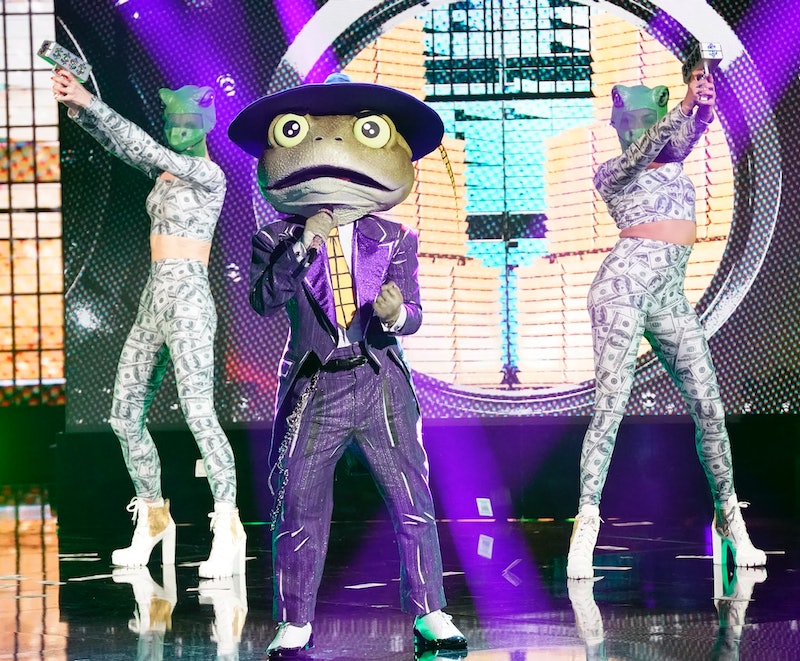 So far, there have been quite a few unexpected celebrities wearing masks in Season 3, but it doesn't seem like the Frog on The Masked Singer is going to shock viewers whatsoever. The judges might be surprised to see who's wearing the mask (they're not exactly known for their correct guesses), but fans are absolutely convinced Bow Wow, aka Shad Moss, is the Frog. And based on the clues, it's hard to believe it's anyone but him.

The 32-year-old rapper first came onto the music scene at the young age of 13 with his debut album Beware of Dog. At that time, he was also known as "Lil Bow Wow." There have been multiple "tadpole" references to how the frog became famous at an early age in his various clue packages, which definitely fits with Bow Wow's early career. Plus, there have been many dog references, including the first Frog clue package showing a bag with "leftovers" written on it (aka a doggy bag) and hush puppies spilled out of it.

But, the doggy clues aren't the only hints pointing to the rapper. More than once, the Frog has mentioned "Prince," but it doesn't seem like he means the singer. According to Cinema Blend, Bow Wow was known as the "prince of hip hop" when he was young, so he could just be referencing his former identity.

As for the basketball that couldn't be missed in one of the clue packages, Bow Wow starred in 2002's Like Mike and even released the song "Basketball" for the movie.

And, finally, the one clue that seems to bring it all together is when Frog was shown typing on a typewriter where the letters C, S, and I, were highlighted in red. Bow Wow starred in the short-lived CSI spinoff, CSI: Cyber, that also starred Patricia Arquette, James Van Der Beek, and Ted Danson.

No matter how you look at it, all clues point to Bow Wow.

More like this
Britney Spears Shares & Deletes Photos Of Justin Timberlake From 22 Years Ago
By Jake Viswanath
Brad Pitt Wants To Share The Spotlight With This Celeb In Shania Twain’s “That Don't Impress Me Much”
By Alyssa Lapid
Cruz Beckham Teased New Music With An Adorable Nod To Mom Victoria Beckham
By Stephanie Topacio Long
The Spice Girls Are Set To Reunite At King Charles III’s Coronation
By Sam Ramsden
Get Even More From Bustle — Sign Up For The Newsletter
From hair trends to relationship advice, our daily newsletter has everything you need to sound like a person who’s on TikTok, even if you aren’t.