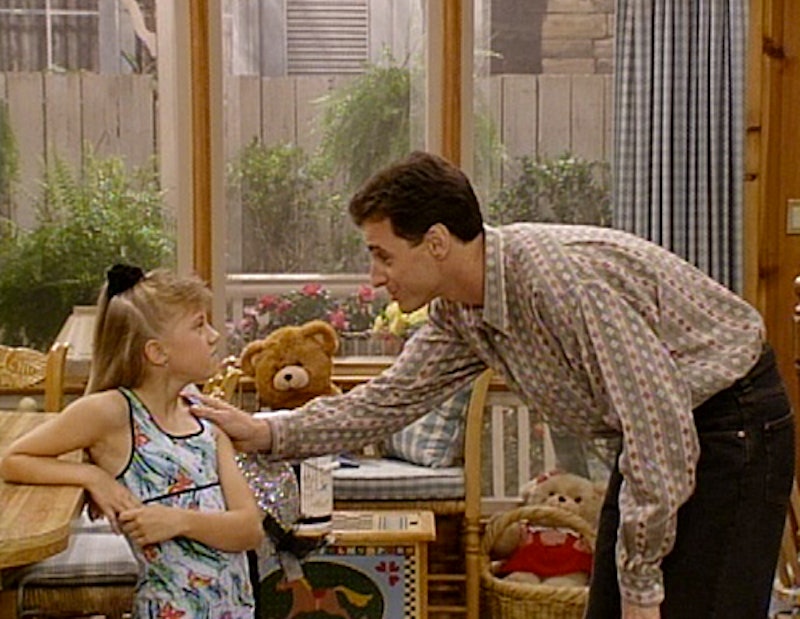 When thinking of '90s nostalgia, a couple things tend to float to memory first — Friends-mania, unfortunate floral prints, and a nation just starting to surf the web. But for many millennials, that list would also likely include Full House. The whole series now feels like a time warp when you watch it today, but there's actually one Full House episode that's so 90s it hurts.

Oddly, Full House was the polar opposite of most of it its critically lauded '90s peers; Seinfeld and The Simpsons, for instance, were boundary-pushing anti-sitcoms, while Full House leaned firmly back on classic sitcom tropes like an adorable baby, sassy catchphrases, a stern wet blanket (hi, Danny Tanner), and a neat resolution by the end of each episode. Still, the show managed to capture the less-avant garde '90s zeitgeist so thoroughly that today, it sticks in fans' minds as the perfect distillation of the decade.

In particular, Season 5's "Gotta Dance" could be shown to future anthropology classes if students wanted to understand the deeper workings of the decade that brought us both the Clinton reign and Urkel. Here's a breakdown of every element of the episode that screams its year to the rafters.

More like this
These Memes & Tweets About Alicent in 'House Of The Dragon' Prove She's The Queen Of Messiness
By Grace Wehniainen
'House of the Dragon' Episode 7 Might Mark The End Of House Velaryon
By Kadin Burnett
'House of The Dragon' Episode 6 Will Take Place A Decade After Episode 5
By Kadin Burnett
24 Years Ago, 'Friends' Dropped Its Most Underrated Ross & Rachel Episode
By Grace Wehniainen
Get Even More From Bustle — Sign Up For The Newsletter