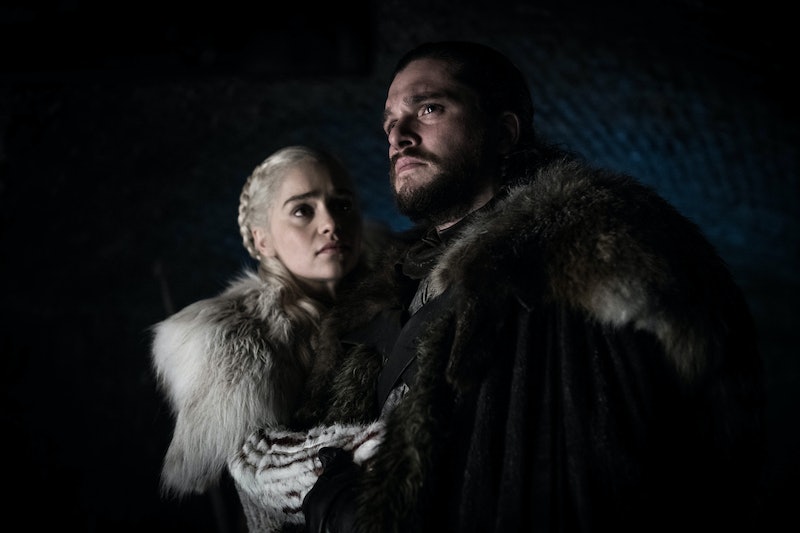 At this point, most people were well aware of the fact that Jon Snow is half-Targaryen, Daenerys' nephew, and rightful heir to the Iron Throne. However, for Dany and Jon it's relatively new information — and the something that the two are currently grappling with. While their characters aren't taking the news very well, their real-life counterparts are full of jokes, as evidenced by Emilia Clarke's Game of Thrones family portrait photo that's guaranteed to put a smile on your face.

Clarke uploaded a photo to her Instagram account on Tuesday morning, which features her and Harington in a Vikings-themed photo cut-out display and the expressions on their faces are simply priceless. The caption of the image reads "The family portrait" and includes several hashtags like, "#jeneregretterien," which is French for "I regret nothing" as well as "#okmaybehereiseetheresemblance." Needless to say, it's a pretty fitting (and highly hilarious) way to celebrate the fact that the truth about Jon's parentage is finally out in the open after seven seasons in the making.

Jon was told the truth by Sam in the Season 8 premiere, but it wasn't until Episode 2 that he decided to pass along that knowledge to Dany, his love interest and biological aunt.

Needless to say, she didn't take the news very well, but not because of the fact that they're related, but more due to the revelation that he could potentially take the Iron Throne away from her, as the last male Targaryen heir. And to see herself come so close to her goal of ruling the Seven Kingdoms only to have it taken away in the blink of an eye would be understandably a lot to digest. (And the fact that Jon decided to drop this piece of intel on her just before the battle with the Night King commences is truly the most Stark thing he's ever done.)

After the episode aired, Clarke justified Dany's reaction to finding out the truth about Jon's backstory during an interview with Entertainment Weekly. "The related thing, to her, is so normal," Clarke explained, adding:

"She could have easily married her brother. It's not a thing. It's a thing for Jon, but let's just forget about that. The main thing is we're up for the same promotion and I've been working for it for my entire existence. This is my whole existence. Since birth! Dany literally was brought into this world going: RUN! These f*ckers [in Westeros] have f*cked everything up. Now it's, ‘You're our only hope.' There's so much she's taken on in her duty in life to rectify. There's so much she's seen and witnessed and been through and lost and suffered and hurt to get here … and Jon doesn't even want it!"

But even though Jon may never have wanted to throne, would he take it now that the opportunity has presented itself? He and Dany didn't get a chance to discuss much about what this could mean before the White Walkers showed up, so that'll all have to be put on the back-burner for now. But however this ends up playing out, odds are it won't be as comical as Clarke's latest Instagram post.