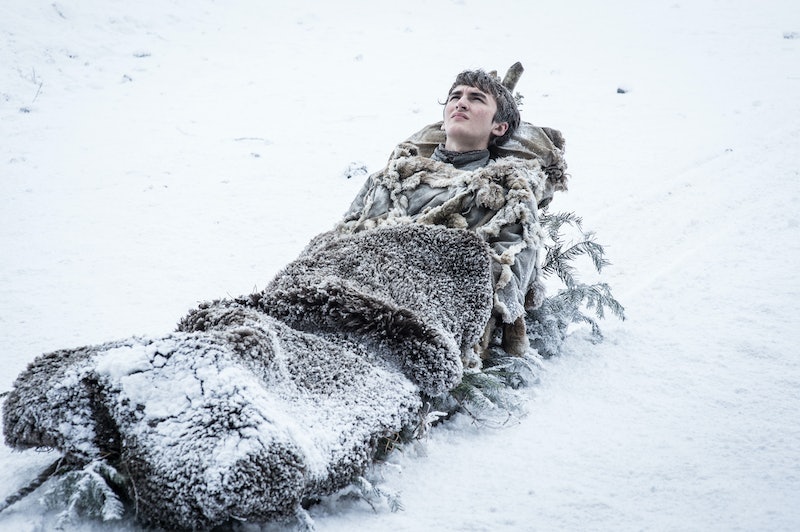 Almost a year and a half after the end of Season 7, fans finally received their first look at the final season with the new Game of Thrones Season 8 trailer, and it's a doozy. Of course, any footage would be welcome after such a long time between seasons — including a three second look at Sansa, Daenerys, and Jon in a previous HBO first look — so this longer teaser trailer is a treat, especially because it includes some pretty dark foreshadowing for the Starks. Most importantly, the Game of Thrones theory that Bran is the Night King is looking better than ever thanks to the new teaser.

In the new teaser, which premiered before the Season 3 premiere of True Detective on Jan. 13, three of the four remaining Stark family members take turns walking down a torch-lit hallway in their family's crypt. Jon Snow is first, and he passes a statue of Lyanna, who viewers now know is his mother. Then Sansa walks, passing a statue of her mother, Catelyn Stark. Arya doesn't walk past a statue, but you can still hear Catelyn talking as she does strut rather confidently in the crypt. Jon also passes Eddard Stark's statue, with a voiceover reiterating what he last told Jon: "You are a Stark. You might not have my name, you have my blood." But, while these communications with dead Stark family members is rather sweet, if not a bit creepy, there is one glaring omission: Bran Stark. Where is Bran?

The teaser ends with the three siblings staring into the faces of their own statues, foreshadowing their own deaths. As fans know, when a member of the Stark family dies, they are buried in the crypt and marked by a life-size statue made in their image. Not a super promising tease, considering the hallway is then filled with ice and frost, eluding to the White Walkers. But even with this promise of death on the horizon, the most disturbing detail is that the fourth Stark child is nowhere in sight.

Bran's lack of appearance might actually be significant and adds more evidence to the theory that Bran is the Night King. As pointed out by Nerdist, the Reddit user turm0il26 has a pretty extensive theory laid out, one that points to his changing of the past and his failed attempts at stopping the Night King every time he tries as evidence.

This is of course still just a theory, as when Bran did go back in time to see the creation of the Night King, he seemed to come back into his body after a bit of struggle, but back nonetheless. But what if he still has a connection or is a double agent of sorts? The theory that Bran is the Night King has been debunked time and again, but there are still just as many clues pointing to him being the Night King as there are supposedly proving he is not.

And many fans are seeing the new Game of Thrones teaser as more proof that the theory is correct. Bran really could be the leader of the White Walkers.

As some of these tweets point out, there are other hints at confirming this theory on top of him not being there. The feather, which is the first victim of the incoming frost in the teaser, could symbolize his position as the Three-Eyed Raven. This would point to Bran dying in the coming war, or it could mean he is the leader of the war.

The again, it could all just be a coincidence, or the creators of GoT trolling all their fans, but either way, it does confirm that this last season is going to be one for the books. There's really no true way to prepare for something of this magnitude so, just remember: valar morghulis. All men must die.

More like this
Nicola Coughlan Shared A Lady Whistledown Excerpt From ‘Bridgerton’ Season 3
By Grace Wehniainen, Alyssa Lapid and Sam Ramsden
The New Bachelor Will Be Announced Next Week & Here Are The Top Contenders
By Grace Wehniainen
The 'Bachelor In Paradise' Schedule Shifts To 4 Hours Every Week After The Season 8 Premiere
By Brad Witter
Alicent's Green Dress In 'House Of The Dragon' May Be An Act Of War
By Kadin Burnett
Get Even More From Bustle — Sign Up For The Newsletter