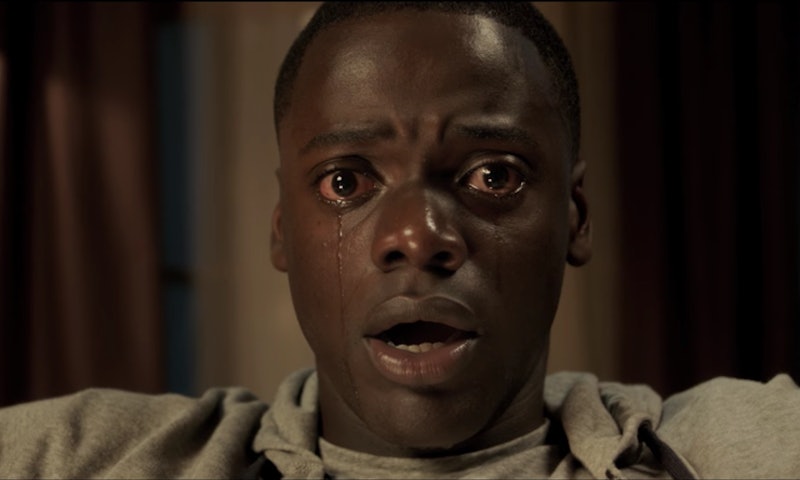 If you saw Get Out, the Jordan Peele-directed social thriller, and are dying to learn more about how it fits in with the whole genre of Black horror and American history, then you're in luck. Now you can take an online class about Get Out from the comfort of your own couch — even if you’re long past your college days. Tananarive Due, an author and lecturer in UCLA’s Department of African American Studies, is the mastermind behind the original UCLA course that went viral last year, and the new online class, which is not affiliated with UCLA. The original class looked at how cinematic portrayals of blackness impacted real-life racism, and it's necessary information for a lot of people.

If you haven’t seen Get Out, you need to ASAP, but I’ll give you a quick overview. Chris Washington (played by Daniel Kaluuya) is a Black man dating a white woman named Rose Armitage (played by Allison Williams). Chris and Rose go to visit her family for what Chris thinks is an innocent meet-and-greet, but his time at the Armitage's home ends up being a metaphor for the horrors of modern day racism. It was classified a comedy by the Golden Globes, but there's nothing funny about the racism Black people face in the United States everyday — which is, ultimately, the message of the film.

Due's class is called "The Sunken Place" in reference to a hypnotized state Chris finds himself in during the film, and she says Get Out inspired her to explore the genre of Black horror. “I love horror,” Due said in an interview with Gizmodo. “But it never dawned on me that I could have a Black horror course before Get Out. When a movie like that comes along, you now have a reference point to talk about everything that has come before. [“The Sunken Place”] is going to be a Black horror overview course that will be very cinema-based. It’ll look at cinema going back to the ’30s.”

Starting Jan. 13, you can follow along with Due and Steven Barnes as they explore the Sunken Place. The course will consist of six lectures that you can watch live or follow along at your own pace. Due tweeted that you can actually send your questions about the film to Jordan Peele, the director of Get Out. And if you think he’s going to blow you off and not respond to your question, think again: He surprised last semester’s UCLA class with a visit where he discussed the film and answered questions.

“Anyone should jump at the chance to take a class with her. She is one of the most insightful social critics and writers of our time,” Dani Williams-Jones, a UCLA student who took Due’s class last semester, said in a press release.

The best part about this online course is, unlike the in-person class at UCLA, there is no capacity limit. So you could be learning with many people from all over the world.

Peele is scheduled to be a guest during this webinar, as is Tony Todd, an actor who was in another popular Black horror film called Candyman. Lectures include “From The Birth of a Nation to Get Out...from being the monsters to fighting the monsters” and “What horror is and common tropes in Black horror.”

Glenn Karl Palmer, a fan of horror movies who took the webinar, said “The payoff from this course has been much more than I expected. You have made me aware of many issues like whitewashing and cultural appropriation,” according to the webinar’s official website.

The course is currently priced at $348, but prices may go up as the start date for the webinar draws closer. Payment plan options are available for those who aren’t able to pay the entire amount at once. The early bird price also comes with a bonus screenwriting course, so maybe you’ll write the next blockbuster film after taking this class.

Get Out has solidified itself as an important part of American culture. If you’re interested in learning about Black horror movies and racism in America (and miss the college classroom setting), this is a very cool opportunity.

More like this
Ashamed Of Your Screen Time Stats? Here's How To Change That
By Alexis Morillo
These Artists Are Reimagining Black History Month To Create A Better Future
By Katie Mitchell
25 Inspiring Quotes From Black Women To Celebrate Black History Month
By Kyli Rodriguez-Cayro and JR Thorpe
Learning To Love, Not Judge, The Lunchbox Wives Of TikTok
By Esther Zuckerman
Get Even More From Bustle — Sign Up For The Newsletter
From hair trends to relationship advice, our daily newsletter has everything you need to sound like a person who’s on TikTok, even if you aren’t.