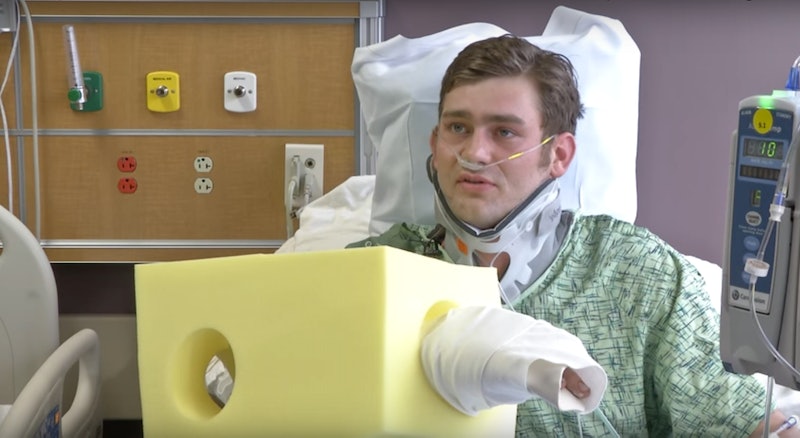 Thousands of people are stepping up to help a man many are calling a hero. Ian Grillot was shot in the chest and the hand Wednesday while trying to subdue a man who allegedly opened fire on two other men at a bar in Olathe, Kansas. A GoFundMe campaign established to help Grillot cover his medical expenses has quickly received an outpouring of support. As of early Sunday evening, the campaign had already surpassed its goal of $300,000.

Grillot, 24, had reportedly been enjoying an evening out at Austins Bar and Grill when a man eyewitnesses claimed had earlier been verbally harassing two Indian men with ethnic slurs and orders to "get out of my country" opened fire in the restaurant. According to an account of the incident Grillot gave in a video posted to the University of Kansas Hospital’s YouTube page, Grillot moved to subdue the gunman when he thought he'd fired all of his rounds.

"Initially, I'd gotten under the table when he first started firing," Grillot said. "I thought I heard nine shots [so] I expected his magazine to be empty. I got up and proceeded to chase him down, try to subdue him so the police could come in and do what they needed to do and I guess I miscounted with everything going on."

Grillot said he was shot in the hand and the chest with the bullet fracturing one of his vertebrae but barely missing his carotid artery. "I'm grateful to be alive," he said. "Another half inch and I could be dead or never walk again... I was told I was incredibly lucky."

A GoFundMe page was set up Thursday by a woman who identified herself as Grillot's sister. "Wednesday night - Ian found himself in the wrong place trying to be a helping hand," a description of the fundraising campaign reads. "He's going to have a lengthy recovery road and is already worried about how he will afford it which is the last thing he needs." With the help of more than 10,000 donors, the campaign has raised more than $388,800 in the span of three days.

With their donations many donors have also offered their gratitude, hailing Grillot as a hero. But it's a label Grillot has dismissed. "I've been hearing that a lot of people call me a hero and this, that, and the other," Grillot said in his interview at the University of Kansas Hospital. "No, it's not like that. I was just doing what anyone should have done for another human being... I did what was naturally right to do."

Authorities are now investigating whether the shooting, which killed Srinivas Kuchibhotla, was "bias motivated." GoFundMe campaigns have also been established to help Kuchibhotla's family with funeral costs and to assist Alok Madasani, who was wounded in the attack.