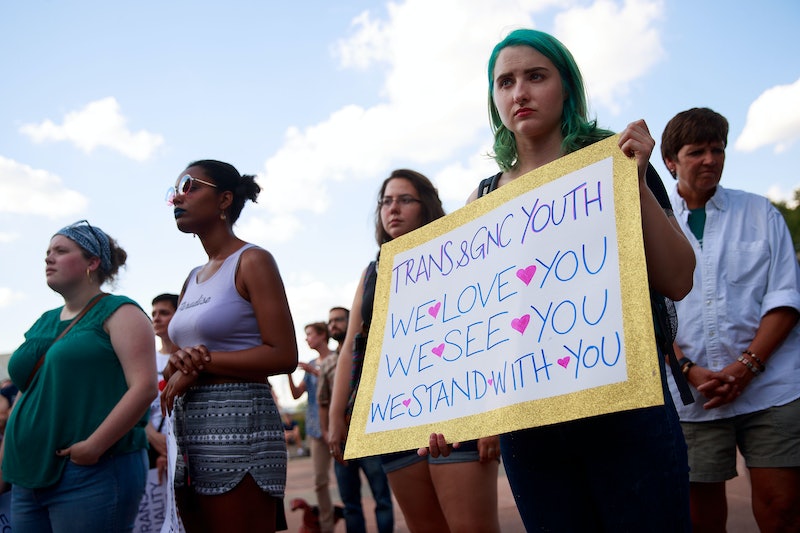 Last week, a 12-year-old transgender student faced extensive online threats and mockery from parents after she used the girls' bathroom in her middle school's building. Now, a GoFundMe is helping this Oklahoma transgender student move away from the town of Achille and the school system in which she experienced harassment. So far, the fundraiser has skyrocketed past its original goal of $15,000, as it currently sits at around $31,000 and counting.

According to the GoFundMe page, which was started by Oklahoma City journalist L Anne Babb, the student's family moved to Achille, Oklahoma, from Sherman, Texas, several years ago after the student faced bullying at her former Texas school. The seventh grader has attended school through the Achille school system since fifth grade and previously used the staff bathroom. She decided to use the girls' bathroom on her first day of seventh grade, since her classes were located in a new building and she was unaware of the location of the staff bathroom.

A school parent, Jamie Crenshaw, then got word of the 12-year-old's use of the girls' bathroom and posted a "warning" to others on a Facebook page for Achille parents. As the Washington Post reported, Crenshaw wrote in a now-deleted post:

Heads up parents of 5th thru 7th grade girls, ... The transgender is already using the girls bathroom. We have been told how the school has gone above and beyond to make sure he has his own restroom yet he is still using the girls. REALLY . . . Looks like it’s gonna be a long year.

In response to Crenshaw's post, several other people left disparaging and threatening remarks. According to the BBC, some people referred to the young girl as a "thing" while others threatened violence against her. These Facebook posts eventually became widely publicized and, according to Time, the school ultimately decided to shut down for two days last week, reportedly on the advice of local law enforcement.

Babb, the journalist mentioned above, indicated that she had heard about the 12-year-old's experience and subsequently contacted the girl's mother to inquire about the prospect of starting a GoFundMe page to help the family relocate. The pre-teen's mom noted that her family would be very grateful for the ability to relocate, saying (as reported by Babb via GoFundMe):

[Moving] would be such an amazing blessing to be honest. We have family in Houston that have been wanting us to move to them for years, but it has just never been a financial possibility. We actually tried a few years ago, but it all just fell apart, and was a mess. If we had the financial means to actually move, and get set up there, close to our family, and in a city that has so many more resources ... it would literally be life changing!

The Washington Post also reported that the family plans to leave Oklahoma following their daughter's experience at her middle school. The paper noted that the girl's mother wrote on what seems to be her Facebook page that the family wishes to move to a more inclusive place:

While I know the school district here is doing everything they can ... it's not just at school that I'm scared for her, and where we would like to move to is much more open to people like my daughter, she'd have more medical resources, and we'd be with loving, supportive family.

If you wish to donate to the GoFundMe page for this student and help support her move, you can contribute directly through GoFundMe's website.