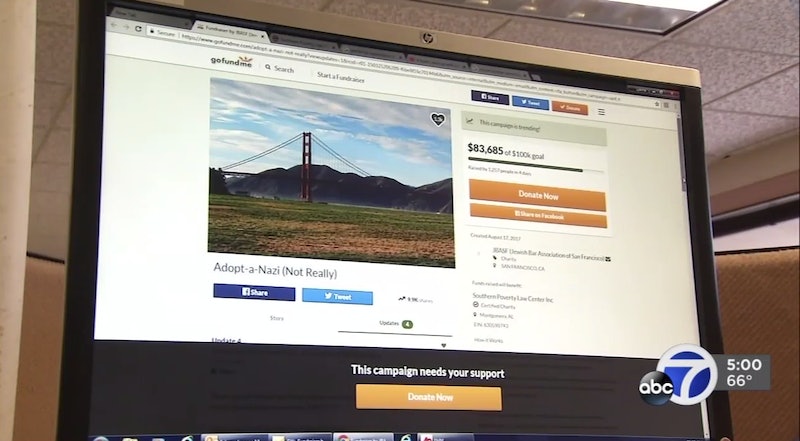 When a "Free Speech" rally hosted by Patriot Prayer, a group that has historically attracted white supremacists, descends upon San Francisco next week, it will have helped to raise hundreds of thousands of dollars to fund its demise. A crowdfunding campaign titled "Adopt-a-Nazi (Not Really)," has used the rally to raise more than $111,000, and counting. And it won't be used to benefit Nazis — instead, organizers will donate the money to an organization that works to eradicate hate groups. (An organizer of "Patriot Prayer" has emphasized that the rally will not allow neo-Nazi symbols or white supremacists.)

It's a response to Charlottesville as much as it is to what's going on in these other cities. This rally has attracted these types of people in the past, and if any of them might show up, let's turn it against them.

The Jewish Bar Association of San Francisco is at the forefront of a campaign to "adopt Nazis" as a way of counter protesting a planned alt-right rally at Crissy Field in San Francisco on Saturday, Aug. 26. The GoFundMe page asks people to donate an amount per demonstrator, of which there are 300 expected to attend, to the Southern Poverty Law Center, an non-profit organization that tracks hate crimes and works to combat extremist groups across the country. The concept is to use the hateful rally as a means to raise money for forces that would do away with such groups.

"This is a powerful idea, it's a way to empower people to respond in a constructive way that turns these people's energy against them," Cody Harris, the creator of the campaign, tells Bustle.

Harris, a board member of JBASF, says the campaign was inspired by the German town of Wunsiedel, which held a similar fundraiser in 2014 after growing sick of neo-Nazis marching through the town year after year to honor a high-ranking Nazi official buried there.

The town decided to use the "perceived power" of these hate groups and turn it against them by raising money to fund groups that work to fight hate. And after the violence in Charlottesville last week, Harris saw a need for a similar effort here in America.

"I think people in San Francisco and people all around the country were on high alert after what happened there, and are viewing some of these rallies that are being planned through the lens of what happened in Virginia, which I think is a reasonable reaction," Harris says.

Harris says that he thinks people were receptive to the idea, because for many well-meaning Americans, it can be difficult to know how to respond and make your disapproval be known in these instances of hate. Harris saw this campaign as a way to provide a nonviolent outlet for people to show their "revulsion" towards the resurgences of white nationalism that has gripped the country.

It shows that people really want a peaceful, non-violent way to respond to what seems to be a resurgence of these views, and that's what they responding to.

Violence is "not the right way to respond to groups that are espousing these views or are attracting these views," Harris says. "So people were looking for a non-violent and productive way to register their disgust and their revulsion with those views."

As of Wednesday, the page had raised nearly $112,00 from 1,795 people in six days. Donations have come in all varieties of amounts and from all corners of the map, Harris says.

The messages that people have left on the page have been one of the most touching parts of the campaign. One woman made her donation in honor of her white supremacist father because, she said, he inadvertently taught her the difference between right and wrong. Another woman said that she wanted to donate, but could not afford the minimum $5 donation that GoFundMe requires, so another donor anonymously gave the money in her name.

"It shows that people really want a peaceful, non-violent way to respond to what seems to be a resurgence of these views, and that's what they responding to," Harris says. "It's a response to Charlottesville as much as it is to what's going on in these other cities. This rally has attracted these types of people in the past, and if any of them might show up, let's turn it against them."

Joey Gibson, the organizer of the "Patriot Prayer" event told the SF Examiner in an interview that he would not allow white supremacists to attend or Nazi symbols to be portrayed at this weekend's event, even though his rallies are known to draw a white nationalist crowd. Harris is skeptical, based on past rallies, but has a suggestion for Gibson if his denouncement is legitimate.

"Whatever he says now, these rallies have attracted neo-Nazi, white supremacists, militia men and violent, alt-right attendees in the past," Harris says. "We welcome his recent disavowal of those participants, and we would encourage him to donate and spread the word about the campaign."