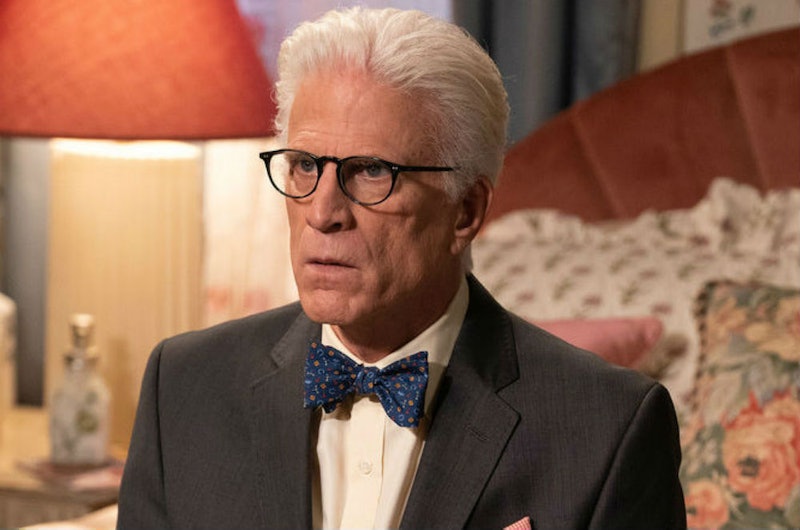 If you thought the Season 1 finale twist was major, just wait until you hear this Good Place theory about Michael. The NBC comedy is known for surprising fans, and seeing as how The Good Place is ending after this season, there's no doubt the series will go out with a bang. As for Michael, there's a theory floating around that he isn't a demon sent from the Bad Place to torture humans, but an actual human himself.

In the words of Eleanor Shellstrop, holy mother forking shirtballs. According to Digital Spy, the theory started when Reddit user Rpres70324 proposed the following: "I always figured that this was Michael's Bad Place… He was a human whose torture was that he was convinced he was a bad-place rep and had to constantly live in a world where he could not be an effective torturer."

Good Place fans have been contemplating similar theories for a while now. In October 2017, Twitter user @nakamachirabu posted, "Wait... Maybe this is Michael's hell? #thegoodplace but then... Is Micheal [sic] human?" And they're not the only one.

Let's take a look at the evidence that Michael isn't a demon, but a human being tortured.

Michael has been under a lot of pressure since Season 1, and it's only gotten worse in Season 4. From being an architect, to trying to successfully torture Eleanor and friends, to trying to transform the Good Place points system, he has consistently failed to reach his goal. One might say this is Michael's form of torture.

It's hard to ignore that Michael has also demonstrated many human-like qualities, including the compassion he's shown Eleanor. Their relationship has changed drastically since Season 1. Plus, Michael has even gone out of his way to assist Eleanor, Chidi, Tahani, and Jason. That said, he could very well still be a demon who's simply changed.

If Michael is human, maybe he's the key to showing that so-called "bad people" can change, which could affect the Good Place points system. He started out as a "demon" torturing human souls and now he's a completely different person, desperate to help prove that humans have a greater capacity for good. As for Eleanor and everyone else, it's hard to believe that they are demons torturing Michael. They could very well be helping Michael get to the Good Place and not the other way around.

This theory is also supported by the fact that the Judge and others in charge of the afterlife have already proven they have the ability to erase memories, which would explain why Michael doesn't remember that he's actually human.

That said, there is a lot of evidence that doesn't totally support this mind-blowing theory. For example, Michael has been shown using powers, suggesting he's truly a demon. Then again, his supernatural skills could simply be a figment of his imagination or he was tricked into thinking he has powers.

In a June interview with Variety, Good Place creator Michael Schur hinted that big things were ahead for everyone's favorite (maybe) demon. "There’s a lot of stuff that happens this year where we sort of revisit the different versions of Michael that have existed over the time of the show, starting with the demon version and going through the middle versions, and going through the end versions," he said.

It sounds like Michael is a huge focus this season, so a big reveal could be around the corner for him. Maybe the entire point of the series was to show Michael's transformation, not Eleanor, Chidi, Jason, and Tahani.

Whatever is coming for Team Cockroach, knowing The Good Place, it'll knock the bowtie right off Michael's neck and then some.

More like this
'The Queen’s Gambit' Season 2 Tweet Wasn’t From Anya Taylor-Joy
By Mary Kate McGrath, Jack Irvin and Grace Wehniainen
Netflix Shut Down 'Bridgerton' S3 Rumours About A “Very Dark” Storyline
By Bustle
'GoT' Star Emilia Clarke Says She "Just Can't" Watch 'House Of The Dragon'
By Brad Witter
This Dark 'Happy Valley' Theory Will Keep You Up At Night
By Sophie McEvoy
Get Even More From Bustle — Sign Up For The Newsletter
From hair trends to relationship advice, our daily newsletter has everything you need to sound like a person who’s on TikTok, even if you aren’t.