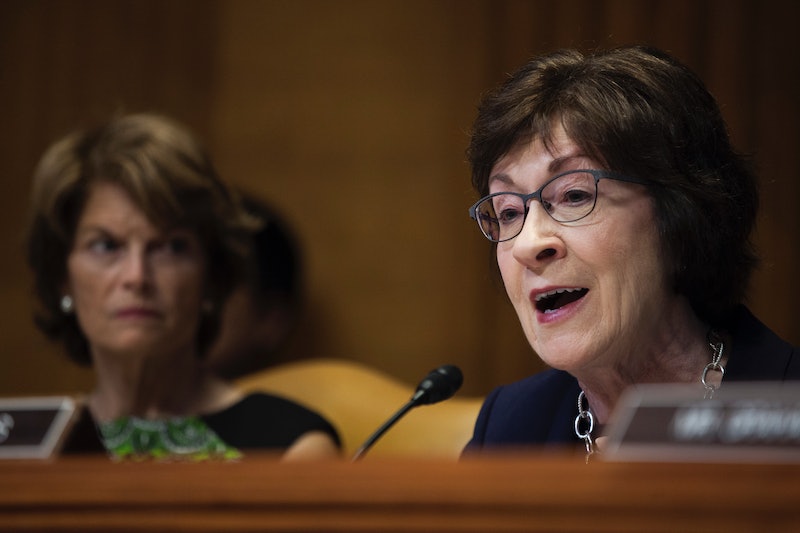 Republican Senator Susan Collins of Maine shared her thoughts on Donald Trump and the ongoing investigation into possible Russian interference in the 2016 presidential election during a Sunday appearance on CBS News' Face the Nation. In what seemed to be a serious warning, Collins advised Trump to "step back" from the Russia probe and avoid sharing his commentary and opinions on the subject until the investigation is officially finished.

Still, the senator appeared to sympathize with Trump's discontent at least a little bit. While explaining her mild disapproval of Trump's commentary on the Russian collusion probe, Collins hinted that she knew how impatient Trump must feel about the probe. "I understand how difficult and frustrating this investigation is for the president," Collins told Face The Nation. "But he should not say anything further about the special counsel, his staff or the investigation." Ultimately, she suggested he have some more faith in Special Counsel Robert Mueller's objectivity and qualifications.

She continued, "I know it's hard, but [Trump] needs to step back and not comment, and let Bob Mueller who is an individual with the utmost integrity, carry out the investigation and make his determination." Collins' solid advice seems to be well-timed, too.

Her suggestion directed at Trump arrived after he gave a pointed interview to The New York Times last week and said that Mueller should not be allowed to investigate Trump's family-based finances as he believed that such a query would be beyond the case of the Russian probe. In the very same interview, Trump also did not rule out the possibility of dismissing Mueller and said that any investigation into his family's monetary assets would be a "violation." "I think that’s a violation," Trump told The Times. "Look, this is about Russia."

For what it's worth, this is not the first time that Collins has shared her two cents on how Trump ought to conduct himself when it comes to the Russian investigation. In fact, after Trump's interview in The New York Times appeared, Collins shared similar thoughts on the issue. She told the Portland Press Herald that the president should not "say another word" about the Russian probe. "What the president should do," Collins said, "is not say another word and let it go forward."

It isn't certain whether Trump will follow his fellow Republican's pragmatic advice as the president has exhibited a tendency to comment on the Russian investigation time and again.