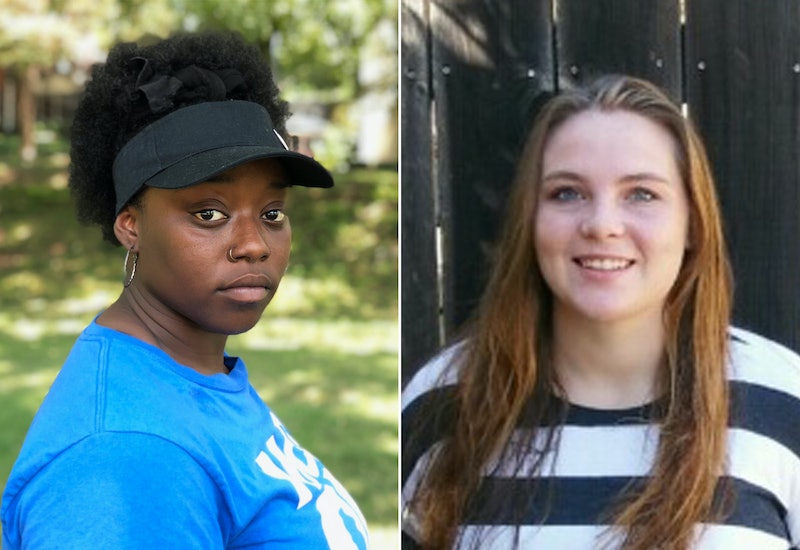 Courtesy of Fight For $15

Last year, McDonald's workers in a number of cities went on strike to protest sexual harassment they alleged was happening under Golden Arches across the country. Now, McDonald's workers are continuing to fight sexual harassment in the workplace by taking their stories public in a Lifetime documentary set to debut Monday and spearheaded by former Fox News host Gretchen Carlson.

Kristi Maisenbach was 19 years old when she got her first real job as a crew member at a McDonald's in Folsom, California. But almost immediately after she'd started, Maisenbach says she had to fend off unwelcome and offensive comments from her immediate supervisor. Soon it wasn't just unwanted sexually explicit comments, but uninvited physical touching, too.

"They didn't really listen to what I had to say, they were just like, 'well, is it your fault?'" Maisenbach tells Bustle. "It made me feel like less than I was worth."

Frustrated, Maisenbach filed a discrimination charge against McDonald's with the U.S. Equal Employment Opportunity Commission (EEOC) in September 2016 and received a right-to-sue letter. She has since filed a lawsuit, in which she alleges she was "subjected to sexual harassment on a daily basis" until she was "forced to quit because of the hours reduction and the continued abusive and hostile work environment."

To the east, at a McDonald's in Kansas City, Missouri, Kim Lawson says she was sexually harassed by two co-workers. The harassment allegedly began with what Lawson described as "brush-ups" from a co-worker.

"He would brush up against me and touch my butt even when there was plenty of room for him to maneuver without doing so," she wrote in an official discrimination charge filed with the EEOC. Lawson tells Bustle that same co-worker would also stare at her, stand too close for comfort, and give her unsolicited gifts and letters.

"I just want a better work environment for me and every other working woman or mother."

When Lawson reported the incidents to a general manager, she says nothing was done to stop the alleged harassment. And so when a shift manager began allegedly hitting on her with unwelcome comments about her body and physical appearance, she says she didn't even bother to report it.

Now, however, Lawson says the harassment, and her silence, have weighed heavily upon her as a mother. "I have a daughter and I want to set an example for her and let her know that it's OK to speak out," she tells Bustle. "If I want to teach her how to stand up for herself, I have to stand up for myself."

Lawson filed a discrimination charge against McDonald's and the company that owned the franchise location she worked at in May 2018; that charge is still pending investigation.

In a statement to Bustle, McDonald's says it has worked to improve its policy on harassment since learning of various alleged sexual harassment incidents.

"We believe that everyone in the McDonald's family should be able to work in a safe, respectful environment," McDonald's Senior Vice President and U.S. Chief People Officer Melissa Kersey said. "With the assistance of RAINN, a leading expert in sexual misconduct prevention and response, we have updated and strengthened our anti-harassment policies."

The company says it plans to implement a revised discrimination, harassment and retaliation policy in the coming weeks at its corporate-owned locations and has begun offering its franchisees access to a new interactive harassment prevention and response training program.

More often than not, though, these women's stories go untold. In an attempt to shine a light on these underreported stories, Maisenbach, Lawson, and a number of other women teamed up with Carlson, who filed a lawsuit in 2016 alleging Fox News CEO Roger Ailes had sexually harassed her (Ailes denied her claims). Carlson dives into Maisenbach and Lawson's stories as part of Gretchen Carlson: Breaking the Silence, which is set to air Monday on Lifetime.

Carlson tells Bustle she wanted the documentary to focus on the stories of everyday women, as it can be nearly impossible for them to come forward. Those working in lower-paying jobs may find it especially difficult, she says, as they can't afford to risk jeopardizing their paycheck.

"But in Kim and Kristi's stories they alleged that they did find the courage to come forward and no one seemed to care," Carlson tells Bustle. "That's why the doc not only tells their stories but it was also important for me to try and get them answers, too."

Telling these women's stories, Carlson says, is the only way to address the problem of workplace sexual harassment. The women agree.

"I just want a better work environment for me and every other working woman or mother," Lawson says. "It makes you think about your child. When they grow up are they going to have to deal with this? Or your little sister? It’s about breaking the cycle now so the younger generations don’t have to deal with it."