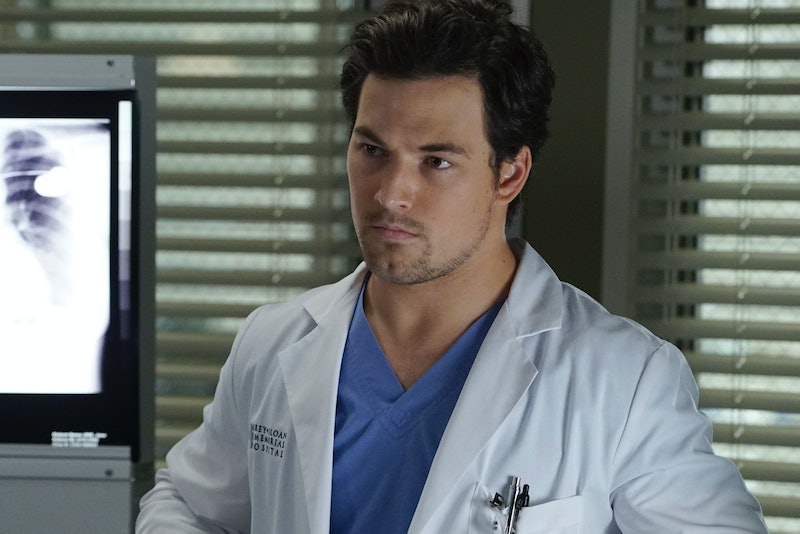 Grey's Anatomy may have been cut short four episodes by an early production shutdown, but Station 19 had already filmed its 16 episodes in full. And since the two shows frequently cross over with each other, the most recent episode of Station 19 might have just confirmed this Grey's Anatomy theory about DeLuca. On Thursday, May 7, the penultimate episode of the show's third season, "Bad Guy," casually revealed that Andrew DeLuca does seem to have bipolar disorder, as his sister Carina DeLuca long suspected.

Andrew's father also has bipolar, although he refuses to seek treatment for it. Now that Andrew is the same age as their dad was when he started showing signs, Carina has been concerned that Andrew may also be exhibiting signs of mania and depression (like not sleeping when working on a tough case, rushing into a snowstorm without gloves, and not getting off the couch for weeks after a breakup). Andrew brushed off his sister's concerns, but the last we saw him on Grey's, he was sobbing on the hospital floor and telling Meredith, "I don't know what's going on." Perhaps in the intervening planned episodes, Meredith was going to try to get Andrew to seek professional help.

The way Carina acted on Station 19 certainly made it seem like he had gotten an actual diagnosis. In a conversation with fire captain Maya, Carina said, "You know, my dad has bipolar 1 and my sweet baby brother has inherited it." Now, this could just be Carina continuing to speculate, as she has all season long, or it could be that Andrew saw a doctor for an official opinion. Only fans weren't able to see it because of the delayed production.

If Andrew was indeed diagnosed, it's something he can manage if he seeks treatment. According to Healthline, bipolar 1 is characterized by severe mania episodes that can even require hospitalization. As far as treatment, the Mayo Clinic says that doctors often use a combined approach. They may prescribe medications like mood stabilizers, antipsychotics, and antidepressants. They may also recommend psychotherapy to help people identify unhealthy behaviors before they are exacerbated. So Andrew could have a long journey ahead, should he choose to seek treatment whenever Grey's Anatomy returns.

Knowing Meredith, she'll do everything she can to help him get treatment. And we may see this put into action as soon as the Station 19 finale on May 14. The episode is doing a big crossover event with the Grey's characters, and showrunner Krista Vernoff told TV Line that the episode may contain some big hints.

"Ironically, when fans watch Episode 15 and 16 of Station 19, they will probably have a feeling of some of what we had planned for [the original Grey’s finale]," she said, adding that some Grey's-specific material was still cut from Station 19 so as not to give everything away. But it seems that she didn't mind spoiling that the Andrew theory could be true. Andrew, Meredith, Carina, and everyone who cares about Andrew are already being set up for difficult times ahead.

More like this
Netflix Shut Down 'Bridgerton' S3 Rumours About A “Very Dark” Storyline
By Bustle
Shonda Rhimes Responded To The Surprise Exit Of A Day 1 'Grey's Anatomy' Figure
By Grace Wehniainen
This Dark 'Happy Valley' Theory Will Keep You Up At Night
By Sophie McEvoy
This Dark 'Happy Valley' Theory Is Staring You Right In The Face
By Sophie McEvoy
Get Even More From Bustle — Sign Up For The Newsletter
From hair trends to relationship advice, our daily newsletter has everything you need to sound like a person who’s on TikTok, even if you aren’t.