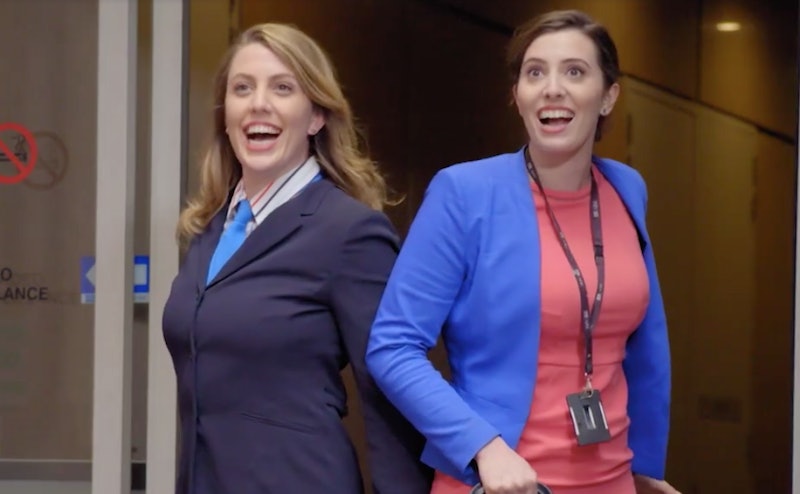 Call me crazy, but my definition of work is "stuff someone else pays me to do." Unfortunately, thanks to a little thing called the wage gap, women are paid less, on average, than their male coworkers for the same amount of labor. As a new Growing Up Gracefully sketch about the pay gap points out, this means that if men's wages are the standard, women stop being paid sometime in the afternoon — in Australia, for example, that time is 3:43. So if work is defined as earning money for labor, and women stop earning money at a certain point... What's to keep female employees from simply going home when the clock hits 3:43?

In the fantasy world of the sketch, that's exactly what they do. Part of the Australian comedy show Growing Up Gracefully, the clip's premise is simple: The Australian wage gap is currently 16 percent. Therefore, women should work 16 percent less than men. I'll let the show's stars, Hannah and Eliza Reilly, explain their message, which they convey via a glorious musical number.

After casting off their corporate chains, they proceed to skip around town, setting their fellow female workers free everywhere they go. When they inform a surgeon that her pay gap is 43 percent, she tosses aside an organ and heads out at 12:34. With a difference in income of 72 percent, female barristers are paid about a quarter of what their male colleagues make — a figure which, one barrister notes, is kind of painful to hear.

Put another way, Australian women work almost entirely for free on Fridays, or they stop getting paid on Nov. 3.

According to BuzzFeed, the Reilly sisters had the help of a team of researchers to make their calculations, using information from the Australian Bureau of Statistics and the Australian Taxation Office.

Since being posted to ABC TV's Facebook page, the clip has been watched more than one million times, and it's been shared 12,000 times. Many of the reactions are supportive, but a substantial number of Facebook users commented to say the wage gap doesn't exist. In 2017, it takes a special kind of determined obliviousness to deny the existence of the wage gap, so I'll keep this brief: It varies by factors like age, ethnicity, country, and chosen profession, but research has shown that the pay gap is real. In fact, according to the American Association of University Women, if the American wage gap continues to narrow at its current rate, it won't close until 2152.

The wage gap is so complicated that realistically, it won't actually be solved if women quit working before men. (That being said, let it be known that I'm down for an international experiment if everyone else is.) However, the Growing Up Gracefully sketch is totally aware it's a fantasy, noting that their plan is "probably not a viable long term solution, but it just feels good."

So does watching the clip. Check it out below.

More like this
34 Quotes That'll Inspire You On Juneteenth & Beyond
By Syeda Khaula Saad and Siena Gagliano
How To Fight For Reproductive Rights, Based On How Much Time You Have
By Courtney Young
The 3 Dating Apps Queer Women & Nonbinary Folks Actually Like
By Emma Carey
Jujubee’s Humble Reminder
By Sam Ramsden
Get Even More From Bustle — Sign Up For The Newsletter