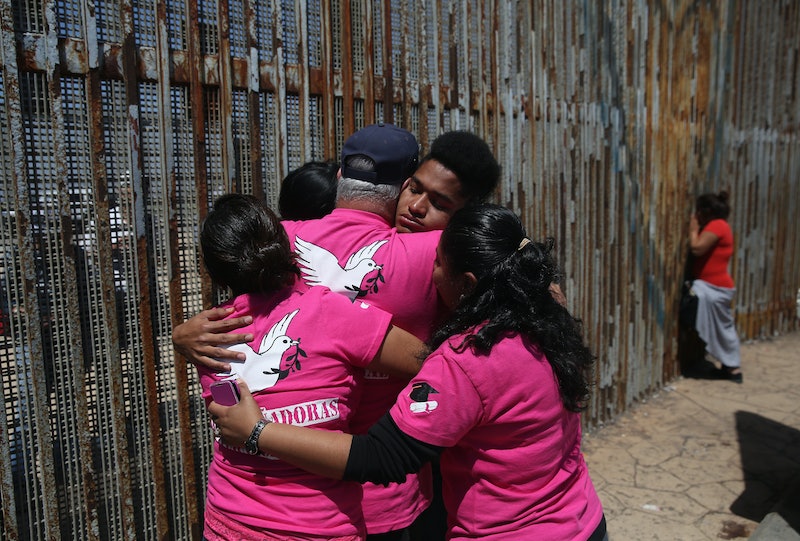 A mother of two in Arizona may be permanently separated from her children thanks to President Donald Trump's executive order on deportation. On Wednesday, 36-year-old Guadalupe Garcia de Rayos went to her biannual meeting with Immigration and Customs Enforcement. Under Obama, the meeting was just a technicality. Trump changed that with the stroke of his pen on Jan. 25. And one particular "Guadalupe Garcia" tweet shows the problem with Trump's deportation executive order, and it's heartbreaking.

Garcia de Rayos was caught in an immigration raid in 2008 at her workplace. She was charged with identity theft for using someone else's Social Security number — a common way for immigrants without papers to get a job in the United States.

She was convicted and separated from her family for six months, but was eventually allowed to stay in the United States because of the Obama Administration's deportation priority guidelines. She was not a threat to public or national safety and had not committed any serious felonies or misdemeanors. Her only charge was using that Social Security number.

This is the heartbreaking part of this story. Garcia de Rayos arrived in the United states when she was just 14. She married and had two children, who are both U.S. citizens. She has not returned to Mexico in 22 years; her life is in Arizona. "The only crime my mother committed was to go to work to give a better life for her children," Garcia de Rayos' daughter Jaqueline told reporters earlier Wednesday.

In this tweet, you see her son looking at her through the window of the ICE police van. Wednesday night protestors surrounded the van, trying to keep Garcia de Rayos from being transferred to detention or brought to the Mexico border. It's not clear where the van was heading.

Hundreds of community activists were able to stop the van at first, one man even tied himself to a wheel well while six more stood in front, blocking its path. But then all seven were arrested and ICE brought the van back inside their facilities. They then appeared to leave through another entrance at about midnight Thursday. Gadi Schwartz, a correspondent for NBC News, reported that the protestors started to scream as the vehicles drove away.

This all would be tragic, no matter the reason. But it's important to remember that just three weeks ago, none of this would have happened. The sudden decision to deport Garcia de Rayos seems to be based entirely on Trump's deportation order. "We’re living in a new era now, an era of war on immigrants," Garcia de Rayos' lawyer, Ray A. Ybarra Maldonado told The New York Times.

That's because Trump's executive order gets rid of any prioritization for deportation. Now it's up to the individual immigration officer to decide what to do. Any person without documents in the United States who has been convicted of any crime, charged with any crime or has done something that "that constitute a chargeable criminal offense," is now to be deported.

In Garcia de Rayos' case, it's the use of that Social Security number — something that many immigrants must do to find work. Trump's order even explicitly takes issue with those who do the same. It says those who engage in the "willful misrepresentation in connection with any official matter" are to be deported.

As the ACLU's deputy legal director, Cecillia Wang, said to The Times, Trump "took the gloves off agents and has permitted these agents to go after immigrants regardless of their ties and contributions to the United States." Two children, a husband, and life made over 22 years are quite the ties.

Now, thanks to Trump's policy — as well as the GOP's reluctance to pass comprehensive immigration reform under Obama — her family doesn't know where she is. You can contact ICE now and tell them to free Guadalupe Garcia de Rayos.