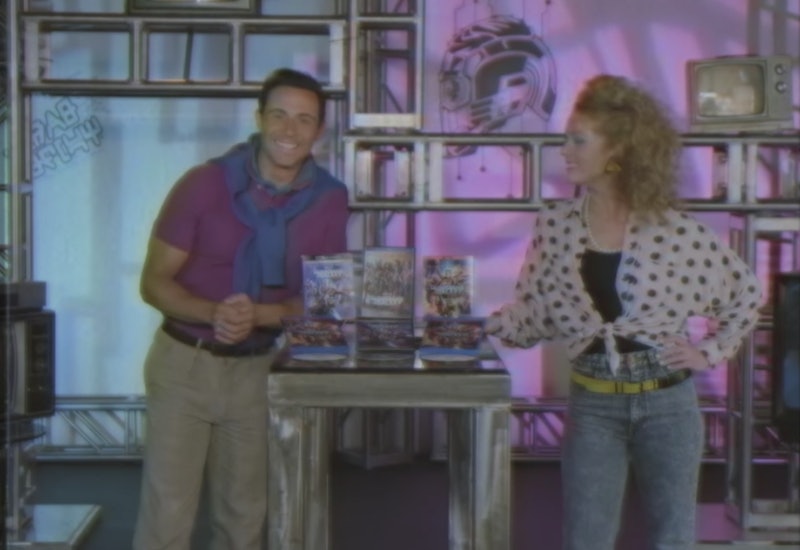 If you're sucker for a nostalgic treat or go wild for a cheesy TV commercial, then you'll love this Guardians Of The Galaxy Vol. 2 infomercial for the blu-ray release of the movie. Combining some of the finest clichés to have come out of the '80s, including washed out denim, tops tied in unnecessary manners, and David Hasselhoff, the commercial is a masterpiece of a trip down memory lane. It even comes complete with poor audio and the static of a bad VHS tape just for that final touch of authenticity.

The '80s style Guardians Of The Galaxy commercial is a throwback not just to the corny infomercials of the era, but also to the long-form trailers you'd often see playing in your local video rental store all the way up to the early '00s. It's also very on brand for the movie, which revels in using nostalgic technology such as Peter Quill's cassette Walkman or his adorable mix tapes that remind him of where he comes from.

And that's exactly what this retro styled trailer also manages to do, reminding us all of our humble, infomercial loving roots. And though we all still love The Hoff, suffice to say that we've come a long way since the days where a long-form TV ad could make us want to pick up the phone and place an immediate order for whatever limited edition thing it was selling. And that's because now we have the internet to fulfill all of our consumerist needs for us (yay).

But, seriously, the level of detail in this video really deserves a round of applause. The commercial has replicated the forced, chipper dialogue of its sales representatives, as well as the awkward silence that follows when the two of them disastrously hit their cues too early.

It has the ludicrous sales number and the cringe-inducing web address that's evocative of all those infomercials of the '80s and '90s that advertised ten disc CD collections with titles like Love Trax or Soul Jamz. (Incidentally, GOTGJams.com is genuinely a legitimate website advertising the various different releases of the movie.)

The commercial also perfectly manages to mimic the way that such infomercials would feature garish scrolling text highlighting the features of the item on sale. Not to mention the wonderfully amateur way the actual physical product on sale is presented to the viewer — neatly arranged on a shiny, polished table. That's how you knew a product was worth buying back in the '80s. Well, that, and the added bonus of a free poster.

It's an absolute dream that's delivered with such a meticulous eye for detail that the video could be taken back in time and aired on a TV network in the '80s. It would fit right in with every other infomercial on screen, too.