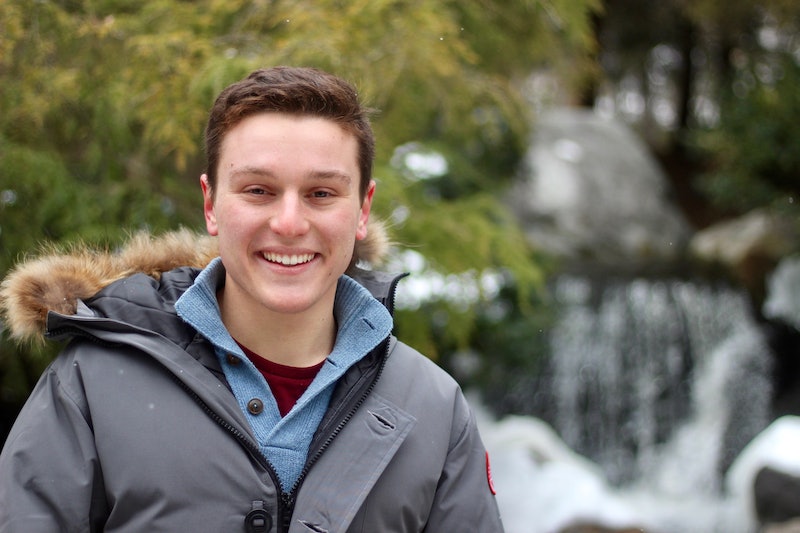 Courtesy of Joeseph A. Adams

First dates and job interviews can have quite a bit in common, from the pre-meeting jitters, to the awkward small talk and sweating in a suit. Now one college junior has taken this comparison to the next level, creating a dating resume for potential girlfriends — and his professional take on romance has gone super viral. The resume project began when Joe Adams, a 21-year-old Michigan State University student, approached a girl in the school cafeteria and asked her out. Long story short: he was rejected. "She asked if I had a ‘dating resume’ that she could look at, and of course I didn't at the time," Joes tells Bustle in an email. Instead of going home and licking his emotional wounds, he turned the joke into an opportunity. "I thought if this ever happened again, I would want to be prepared. So I went home and started making my resume. I put two or three hours into it and then I was ready to go!"

The result, laid out using the resume customization tool Enhancv, looks like a well-crafted document any recruiter would come across; however, upon closer inspection the information listed under "work experience," "Skills," and "Objective" is not as serious as one might expect. The clearly stated objective reads, "To find a honey with a bitchin' family who enjoys sushi, adventures, & good movies." There is also a handy pie chart showing how he divides his time between his religious practices, schoolwork, and compiling epic playlists.

"I just wanted the resume to be light and funny, really," Joe explains. "I decided to include things that were integral to my character, like that I drive a modest but respectable 2009 Honda Civic and I make great small talk with parents. These are for sure my strong points, and I wanted people to know that." Once the resume was complete, he posted the entire story on his personal Instagram, including a copy of the resume, and for months that's where it quietly remained.

When a fellow student posted that she was looking to fix her roommate up with a date for formal on the MSU class of 2018 Facebook group, Joe offered his resume in the comment thread. While the resume didn't lead to an actual date, Joe got lucky when another MSU undergrad came across his handiwork and found it too precious not to share on social media. Simone Campbell tweeted a screenshot of the resume out on March 15, and in just a few days the post has received thousands of "Likes" and retweets.

In an age where Internet dating reigns supreme and vetting a future romantic partner is as simple as swiping left or right on a picture, Joe's earnest and funny approach to romance has earned him quite a few followers. "My phone has been ringing nonstop since Saturday... from both people wanting to interview me and from 14 year old girls insisting that I'm their soulmate," Joe tells Bustle. "I've gotten literally hundreds of offers. From dinner to formals to weddings, a lot of girls have been asking me out."

Since his resume went viral, people recognize him as the "resume guy" on campus, and he is trying to enjoy his status as school celebrity. If there is anything else ladies should know, it's that Joe takes oral hygene very seriously. "I also have prescription toothpaste - that's my go-to icebreaker in any group setting," he adds. "Or was, at least; I think I've got a few more interesting things to talk about now."