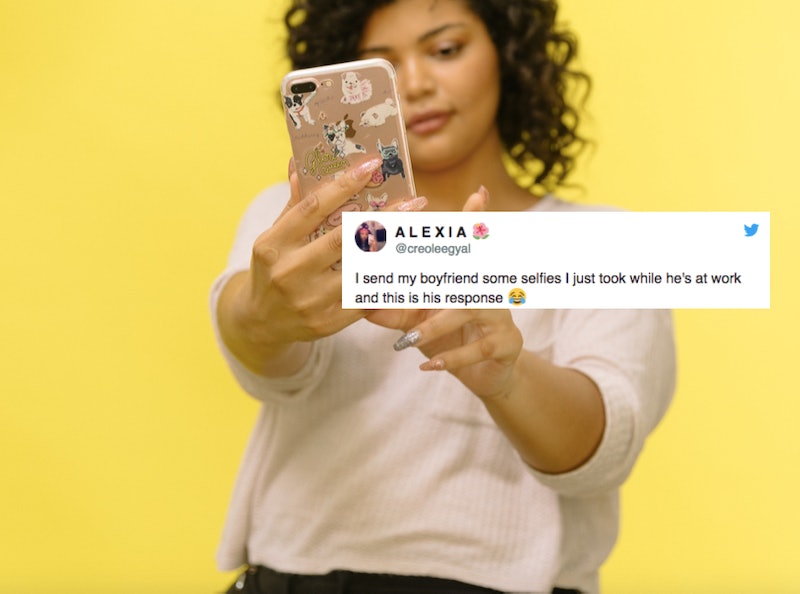 Taking a good selfie is an art form that is severely under-appreciated. I once told a friend that my goal is to look so good on social media that when people meet me in person, they feel like they've been catfished. Even if you aren't as extreme as I am, you probably still value receiving external validation after taking a flattering picture of yourself, especially if you're sending that picture to a romantic interest. Twitter is obsessed with this guy's reaction to his girlfriend's selfie, and it isn't hard to understand why.

Twitter user @creoleegyal posted a screenshot of her text conversation with her boyfriend on Tuesday. In the convo, you can see that she took a mirror selfie with a Snapchat filter and sent the result to her boyfriend while he was at work. His response was a picture of him on the ground with the caption, "Faints." That's it. There's no downside to this story. He took time out of his day to be wonderfully extra, and we're all better because of it. In less than 24 hours, the extremely goals-y tweet racked up over 40,000 retweets and 150,000 likes.

I have now personally raised my expectations for my husband's selfie responses — "You're beautiful" just doesn't cut it when there are people dramatically falling to the ground to express their appreciation for a good, well-lit selfie.

Everyone on Twitter is seriously impressed with the boyfriend, too. Multiple people have recommended that @creoleegy marry him immediately. Other people said they didn't blame her boyfriend for his pretend fainting, complimenting her on her looks and selfie skills. People even shared their own experiences sending selfies to their partners and receiving results that, uh, weren't quite as heartwarming.

The OG poster probably had no idea what she'd start by sharing his response with the world, but I'm glad she did. There's this widespread belief that happy couples don't talk about their relationship on social media, and that the people who do share are overcompensating for an unhealthy relationship, but I've always thought the studies on this topic were way too cynical. Surely, some people lie about their happiness, but tweets like this remind us all how wonderful it is to be in love. She seems a bit overwhelmed by all of the Twitter users who have expressed jealousy and awe in response to her boyfriend's over-the-top compliment, but she's still taking it in stride.

I understand why she says that they're regular people, but her past tweets show that her boyfriend regularly kills the game. In a healthy relationship, you feel valued and respected by your partner. He bought an MCAT study guide to help her prepare for her medical school entry test, so he's here for her beauty and her ambition. I don't know these people, but I love them — and partners everywhere can seriously take notes from this dude.

One of the best parts of the Twitter thread is that the response has been so positive. The Internet often feels like a wasteland, but the replies to the original poster's tweet are filled with people complimenting her and wishing her and her boyfriend luck in life. The sweet moment that she shared with all of us has brought out the best in Twitter, which doesn't always happen. Maybe this is an early sign that 2018 will be better than last year. Regardless, this very pure viral moment is a reminder that people can be kind and that being in love is often filled with goofy moments. I hope that this Twitter user and her boyfriend last forever, and I'll also be side-eyeing my husband until he finds a way to show his appreciation for my selfie skills in a similar way.