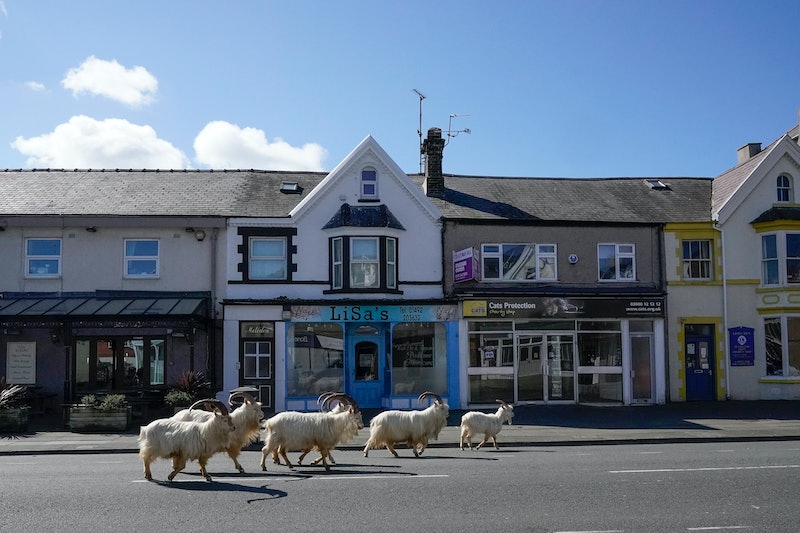 As the coronavirus pandemic continues, so does the onslaught of uncertainty and fear infiltrating our daily news cycle and social media feed. And although keeping up to date with the latest COVID-19 info is imperative, a sense of humour is perhaps needed now more than ever before. Thankfully, a recent social media post, documenting a herd of goats running wild through a small Welsh town, provided a much-needed dose of comic relief. But what is the story behind the viral clip?

Well, it began with a post shared on Friday (March 27) by Twitter user — and self-proclaimed goat correspondent — Andrew Stuart, who joked he had somehow managed to get a group of goats arrested in the coastal town of Llandudno, north Wales. After spotting the animals from the pub in which he currently resides, Stuart captured their unexpected escapades on film, sparking a hilarious Twitter thread.

The runaway goats eventually made their way over to a seemingly delicious row of hedges. However, the herd's midnight feast was rudely interrupted when local police were notified of their rampage.

The rebellious goats were escorted away by a police patrol car, and their antics quickly became the talk of the town. However, just 24 hours later, the goats were back — and in greater numbers.

While strutting their way through the gardens of local residents and several Llandudno hotspots, Stuart joked that he has now come to accept the town's "new goat overlords". He continues to update Twitter followers on the four-legged takeover, which you'll be glad to know has become a daily highlight for the surrounding community.

So, in a landscape often filled with dread, this joyful marauding goat action is precisely what the doctor ordered. Keep it coming, please.