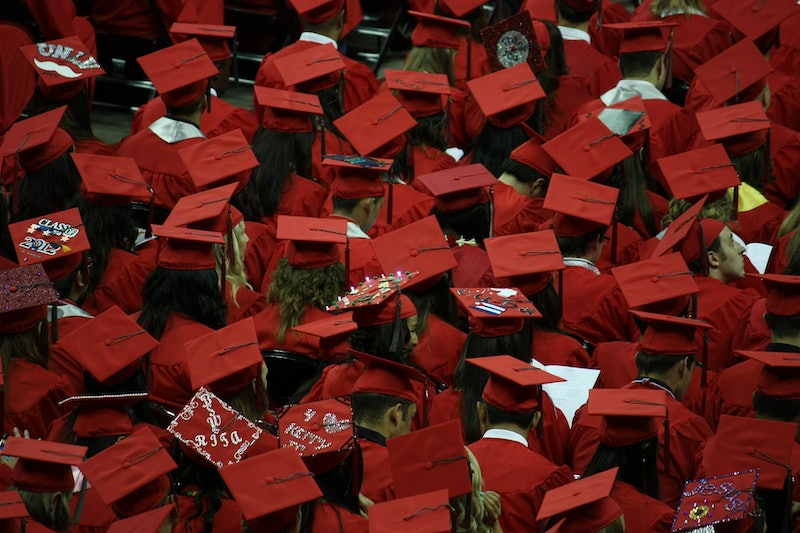 Pixabay
By Lara Rutherford-Morrison
May 22, 2017

Should a green, off-the-shoulder shirt keep a student from graduating? In Harrisburg, North Carolina, a high school student alleged that she was nearly arrested for violating the dress code policy. Ultimately, the incident led to the student being suspended from school activities — including her own graduation ceremony. Bustle has reached out to Hickory Ridge High School for comment and will update upon reply.

Last Wednesday, Summer, a senior on the honor roll at Hickory Ridge High School, wore a green shirt to class that had a wide, scooped neckline and hung from the edges of her shoulders. She alleged that during lunch, the school principal took exception to her clothing and asked her to cover herself with a jacket. WCNC reports that the suspension notice from the school states that, when the principal asked Summer to cover up, citing her exposed shoulders and lower back, Summer said repeatedly, “My shirt is fine.”

A friend lent a jacket to Summer, who put it on and zipped it up. However, Summer claimed that the principal refused to ending things there, and instead told her to go to the control room to change shirts. Summer felt that putting on the jacket should have put an end to the matter, telling WCNC, “I completely understand why a dress code is put into place but I feel like after I put on that jacket it should have been subdued.”

Summer said that she refused to go anywhere until her mother was called. She claimed that this wasn’t the first negative encounter between the student and principal. Summer told WCNC that there had been so many problems between them during her years in high school that her mom had left instructions with the school to call her in the event of any disciplinary issues.

Summer and the principal weren’t able to get hold of Summer’s mother. When lunch ended, Summer left and went to the cafeteria, where, she alleged, the principal took the extraordinary step of threatening to arrest her — yes, for a dress code violation.

“[The SRO] was within five feet of me, he had his hand on his gun. [The principal] said 'I'm gonna give you an ultimatum. We have tried to call your mother. You either come with me to the control room to change your shirt or we will arrest you,” Summer told WCNC.

Summer refused to move, and, she claimed, the principal told the officer to arrest her. Fortunately, that’s when Summer’s mother called back, deescalating the situation.

The principal ultimately suspended Summer for 10 days (citing “insubordination,” not the dress code violation, as the cause) and barred her from participating in activities for seniors — including her high school graduation. Summer told WCNC that there is still a possibility that she could be expelled.

Hickory Ridge High School has its dress code posted online, and it does indeed state, “The shoulders and back must be covered.” School administrators have been strict about student attire in the past. In September 2016, 46 girls were pulled into the principal’s office for wearing leggings with shirts that did not extend all the way to their fingertips.