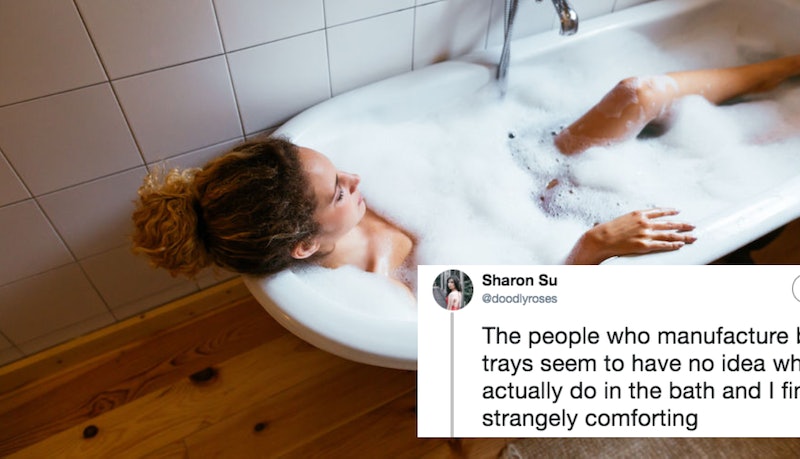 If you're more of a bath than shower person this epic Twitter thread is definitely for you. As many of you will know Twitter is the home of hilarious threads and sassy clap backs, and this thread is no different. Twitter user and classical pianist Sharon Su posted a screenshot of a bath tray with the caption, "the people who manufacture bathtub trays seem to have no idea what women actually do in the bath and I find that strangely comforting" and to be honest she's not wrong.

You can view the thread here, but let me set the scene for you. The photo is stock photo that shows a woman in the bath holding what can only be described as a barista standard hot chocolate complete with frothy heart on the top. Delicious. The woman is in the bath with a bath tray which has on it a large glass of red wine an iPhone on a stand and some flowers, for decoration of course. The edge of the bath is also adorned with tea lights and big candles really setting the relaxing ambience. Now I'm not sure about you but the combination of the two drinks and the flowers make the wildly different from any of the baths I've ever had, but maybe it's just me. Oh but it doesn't end there. Sharon Su was sure to give us more examples of how women bathe, and Twitter was totally here for it.

The next photo shows a women sipping a nice glass of red, while her bath tray has her iPad, a candle (for ambience obvs) a towel and a salad. Yep, you heard that right, a salad. Sharon Su captioned the photo "Love sitting in a bubble bath with a glass of wine and a [checks notes] small undressed salad". She's right, the salad did look a little on the basic side, but I get it sometimes there just is not enough time in the day to eat your salad and have a bath. A girl's gotta do what a girl's gotta do.

By far my favourite photo that really gives an interesting insight into what women do in the bath is the fifth photo in the thread, with the caption "the EXCESS in this photo! White AND red wine! Green AND purple grapes! Eight kinds of cheese! And the piece de resistance...not one, but TWO phones". Two glasses of wine, two types of grapes and two phones, this woman is living the dream. And of course not forgetting the epic cheese board with grapes to compliment. This is the type of bath I aspire to have, all thanks to the bath tray. I've been a fool for too long, never again willI even attempt to bathe without a bath tray for my cheeses and multiple glasses of wine. No wonder the woman in the photo looks so happy.

While all the stock photos featured on the thread feature an alcoholic drink of some kind, (very much my bag) many feature creams, cleansers and one features what looks to be Dior J'adore perfume (I have an eye for these things). Naturally because putting perfume on while in the bath is an absolute essential. I can confirm, I have never put perfume on while in the bath.

This post naturally got tens of thousands of retweets and comments. Some just had a good old laugh. Others pointed out that some of the images looked photoshopped.

Another follower commented with an image of a women bathing in 1872 with the caption, "this has been going on for quite some time. As noted on the caption of this 1872 periodical, this Literary Lady of Boston was depicted writing books in the bath, and appears to have a complete reference library at the ready for this endeavour". The lady in the photo is sitting in the bath writing a novel on a bath tray, but the bath just so happens to be in the middle of the library. Practical. Thank you, Sharon Su, for drawing our attention to this under covered topic.