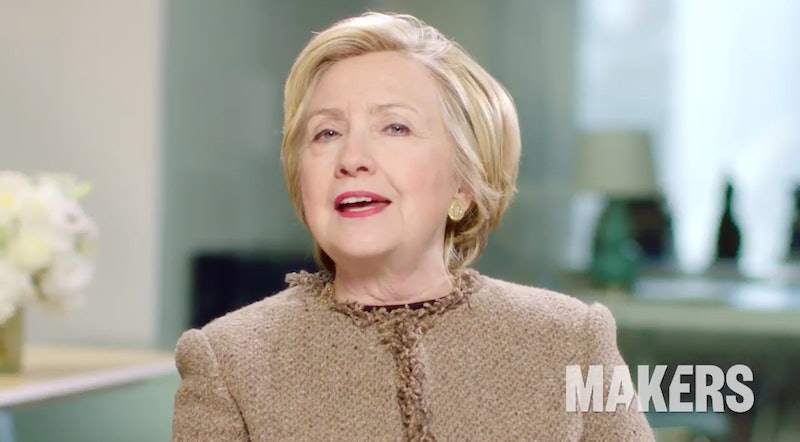 As a woman in the male-dominated field of politics, former secretary of state Hillary Clinton has been an inspiration for other women who aspire to be leaders in their communities. On Feb. 6, Clinton's video statement for the MAKERS conference was released, and her motivational words are just what the women of the world need to hear.

MAKERS, which has collaborated with the likes of former First Lady Michelle Obama, Supreme Court Justice Ruth Bader Ginsburg, and producer Shonda Rhimes, bills itself as the "largest video collection of women's stories." The theme for its 2017 conference is #BEBOLD, and through her video address, Clinton made it clear that she wholeheartedly supports women being assertive. But there's more to her message; through her words, Clinton also inspired women to be strong role models for each other.

We need strong women to step up and speak out. We need you to dare greatly and lead boldly. So please, set an example for every woman and girl out there who’s worried about what the future holds and wonders whether our rights, opportunities and values will endure.

Women and members of other traditionally marginalized groups have already shown their ability to organize and take action on a large scale basis, such as through the Women's March on Washington, which launched a follow-up campaign, "10 Actions for the First 100 Days." But before the Women's March was even an idea, Black Lives Matter has been advocating against state violence for the rights of all black people. And then there are the water protectors at Standing Rock who have time and time again shown compassion for the environment by demonstrating against the Dakota Access pipeline. In all of these movements, women have been at the forefront.

Still, it's possible to get discouraged, even with all of this positive energy. I was scared when I heard hate crimes had gone up in the 10 days after President Donald Trump's election, especially against black people and immigrants, according to the Southern Poverty Law Center. When President Donald Trump signed an executive order to advance the Dakota Access and Keystone XL pipelines, it was hard not to feel like we were back to square one. When he reinstated the Mexico City Policy, banning the international organizations from receiving federal funds if they even mentioned abortion as an option, I was saddened.

It's perfectly normal to be pessimistic from time to time, but that's where the words of a role model are so important. The message from Clinton is a reminder that nothing is hopeless. Even if setbacks happen, things can get better if we work together and stay motivated. After all, if Clinton can stay in the public eye after losing such a contentious presidential election, and if she can pledge to keep speaking up, then there's no excuse for the rest of us not to as well.

As for Clinton's next move, she's reportedly planning a book release this fall, Rolling Stone reported. And no doubt, she'll continue to show what strength truly is.