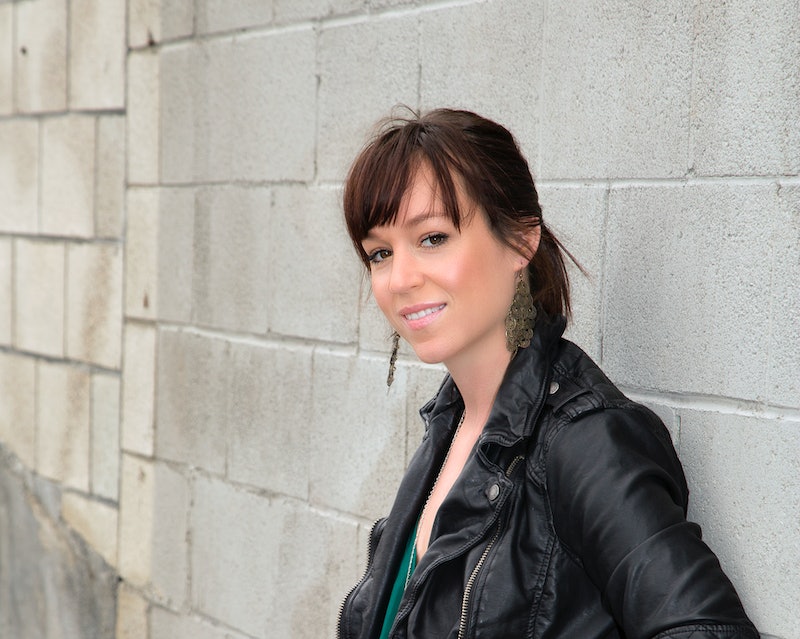 The sex education scene in Mean Girls, where Coach Carr instructs everyone to not have sex because they'll "get pregnant or die," is pretty hilarious. It is also an unfortunately accurate picture of the sex education many American teens receive. While scare tactics are funny on screen, a more sex positive education is better for STI prevention in the long term, according to many public health experts. And for Kelly Gluckman, an ambassador for The Elizabeth Taylor AIDS foundation, the need for positive, comprehensive sexual education hits particularly close to home.

While speaking with Bustle over the phone, Gluckman, 28, shares that despite receiving sex education and regularly getting tested, when she found out she contracted HIV, she was still shocked it happened to her. Moreover, much of her anxiety was due to the stigma surrounding HIV.

"All I knew at that point was 'You get HIV, you get AIDS, and you die.' So, I was reading these papers and wondering when I would die," Gluckman says of her diagnosis.

In fact, with proper medication, HIV can be a chronic, controlled condition, rather than the death sentence it once was.

Then, Gluckman recalls, her unfounded fear devolved into the unrealistic hope, which also stemmed from a lack of information about HIV and AIDS. "It dawned on me that Magic Johnson was cured, right? So, I had this goal to be HIV Negative in one year," Gluckman says. "I pulled out my laptop and I typed in, 'Is Magic Johnson cured of HIV?' Of course, every single website said, 'No, Magic Johnson isn’t cured of HIV. He takes medication every day.'"

Looking back at her own previous lack of knowledge of HIV, Gluckman realizes that fear-based models of sex education not only encourage shame and secrecy, but can also cause assumptions about the ways STIs manifest themselves.

"Other people’s misconceptions are more burdensome than the virus itself."

"We would see graphics of genitalia of people with STIs with extreme symptoms," she says. "The thing is, a lot of STIs don’t automatically show symptoms, so people wait to get tested for symptoms. I didn’t have any symptoms when I went in. I just got tested because I knew it was the smart thing to do."

Even though there has been tremendous medical progress to combat HIV/AIDS, fighting the stigma and fear surrounding it has arguably been slower, as Gluckman's own experience shows. That is why Gluckman now actively shares her personal story — not only to de-stigmatize HIV (and STIs in general), but also demystify the reality of living with it. In fact, Gluckman represented The Elizabeth Taylor AIDS Foundation at this year’s AIDSWatch event in Washington, D.C.

"Other people’s misconceptions are more burdensome than the virus itself," says Gluckman. Acknowledging that in the United States in 2017, she has the medicine she needs to keep the virus under control, Gluckman says, "This has become more of a psychological issue than a health issue, since I am in the place I’m in and time I’m in as far as healthcare. I don't get sick any more often than my friends. My day to day life is good, and there’s so much camaraderie in the HIV community."

Gluckman tells Bustle that she thinks sex education that focuses on the benefits of communicating with partners, condom usage, and the benefits of testing would give people more incentive to be honest and pro-active about safe sex.

More like this
5 Benefits Of Magnesium Supplements Nutritionists Want You To Know
By Carolyn Steber
Zosia Mamet Opens Up About Her Eating Disorder
By Zosia Mamet
An Honest Review Of The TikTok-Famous WalkingPad
By Kaitlyn Wylde
Plan C Vs. Plan B: What's The Difference?
By Lexi Inks
Get Even More From Bustle — Sign Up For The Newsletter