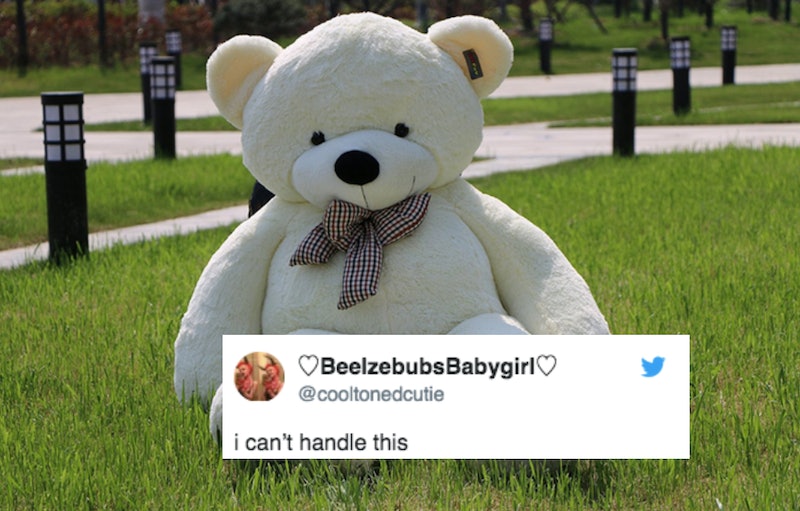 A beloved teddy bear is (usually) a comforting thing. One study found that 40 percent of Americans still sleep with stuffed animals, and another survey found that 1 in 4 British businessmen bring plush toys with them when they travel. I have a giant stuffed bear my husband bought me years ago, and I've told him the bear is staying even if he ever leaves. Sleeping with a stuffed animal as an adult isn't anything to be ashamed of. But as the Internet found out Nov. 9, not all stuffed animals are soothing. This huge stuffed bear you can buy on Amazon is terrorizing Twitter for truly hilarious reasons.

When you first look at the product listing for the toy — "Joyfay Giant Teddy Bear 78" (6.5 Feet) White" — everything seems normal. It's enormous based on the dimensions: six-and-a-half feet and 18 pounds. The seller touts it as the perfect companion for both kids and adults. "No light weights here," the listing says. "This heavyweight offers more huggability than your average bear." It's made of velour and safety tested, and it ships for free. The $109.99 price tag may seem steep, but you're purchasing a bear the same height as Michael Jordan. What could go wrong? Everything, it seems. Twitter user @cooltonedcutie brought this bear and its attendant Amazon reviews to our attention, and I am forever grateful.

I laughed for several minutes when I saw them, and, apparently, so did all of Twitter. The tweet has racked up nearly 130K faves in less than 24 hours, and for good reason. The review images show a bear that is Slenderman-like in its proportions, and I'm honestly going to have nightmares about it.

Bafflingly, though, almost no one cares! The overwhelming majority of people who have bought the bear love it, long legs and all. "Yes the legs are absurdly long but it works because my infant can crawl on them and I don't worry about it falling over," one Amazon user says. Per another reviewer, who also shared some fun facts about a friend's dating life: "Our friend was so jealous he went and got the same one for his girlfriend. (Didn't save their relationship, but was still a great gift)." Only 6 percent of the reviews are one-star, but the people who aren't happy are VERY MAD.

"Hideous! The legs are like 4 feet long making the bear look like a creepy gumby thing," says a one-star reviewer. "I got this for Valentine's Day and would have rather had a cheaper more proportional bear...I mean this isn't even cute."

There's really no appropriate reaction to this other than uncontrollable laughter and a barrage of questions. Why are the legs so long? Is this intentional? Has everyone else simply been doing stuffed animals wrong this entire time? I have questions that need immediate answers, and only three of the 29 product questions relate to the legs. People are asking mundane things, like "How long does it take to ship?" and "Is this a bright white or more of a creamy white?" These inquiries are important for potential buyers, I'm sure, but they seem to be beating around the bush. Thankfully, one customer asked for the length of the legs. There's no official seller response, but based on the answers from other customers, the legs are anywhere from three to four feet long.

There's also a light-brown bear from the same manufacturer with similar stats. Most of the reviews are positive, but the people who weren't expecting long legs aren't happy. "DO NOT PURCHASE THIS BEAR," one customer warns. Another says the bear "looks like an NBA player." An arcade employee who bought the bear to give away as a prize says "the legs end up looking like they were stretched out on a torture rack."

I feel for the Joyfay bear after reading all of the hate toward it. It's clearly doing its best to comfort people, and there are indeed hundreds of satisfied customers. I'm going to stay away because I prefer my sleep to be nightmare-free, but I applaud the people who are loving this bear, flaws and all.