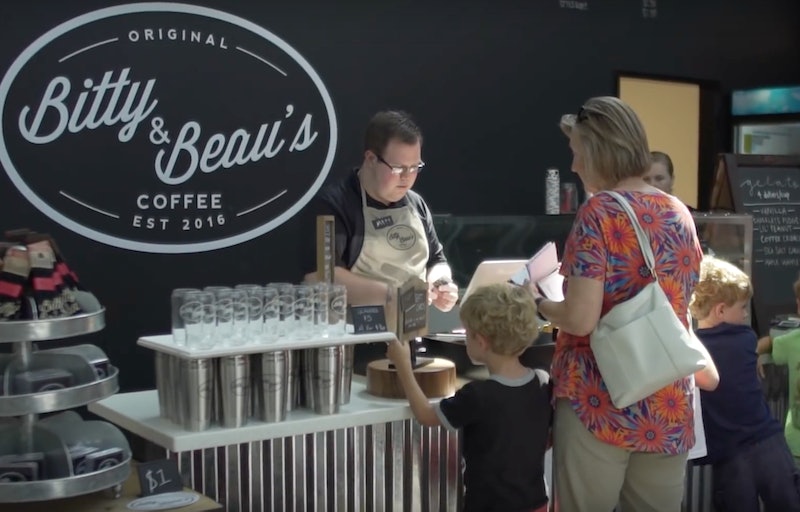 At Bitty & Beau’s coffee shop, you get your latte and muffin with a little something extra: The ability to contribute to a business working to support people with disabilities. The North Carolina coffee shop employs people with intellectual and developmental disabilities, creating an inclusive, supportive environment for employees and customers alike. Since its opening in January of 2016, the shop has proven to be hugely popular, garnering media coverage from major national outlets and expanding its premises in under a year.

Owners Ben and Amy Wright were inspired to create Bitty & Beau’s by two of their children, named — you guessed it — Bitty and Beau. The youngest of four kids, Bitty, 7, and Beau, 12, both have Down syndrome, and their parents are looking ahead to their futures.

“While Bitty and Beau are not looking for jobs right now, it’s on our radar,” Amy said in a video for Southern Living. Employment rates for Americans with disabilities are very low. According to the Bureau of Labor Statistics, in 2016, only 17.9 percent of people with disabilities worked. Among folks with disabilities who are available and actively seeking work, the employment rate is 10.5 percent, more than double that of people without disabilities (4.6 percent). “[W]e saw the folks who had graduated high school and most of them, we found, just basically had not a whole lot to do,” Ben Wright told TODAY. “Very few had jobs, and if they had a job it was just for an hour or two a week. And to be fair, some folks can only work an hour or two a week and that’s fine. But we didn’t want things to just go radio silent for them once they graduated high school.”

The Wrights addressed the problem head-on, creating Bitty & Beau’s last January, and generating jobs for 19 employees with intellectual and developmental disabilities. When they moved to a new, much larger space in July of 2016, their staff grew to 40. “The whole point is just to show people who come in that people with intellectual and developmental disabilities can do a lot more than you think they can,” Ben told TODAY.

Customers seem to love Bitty & Beau’s. “It’s a happy place,” customer Charlie Baker told TODAY. “I walk out, and my day is immediately better.” The shop has been so successful that the Wrights plan to open a second location in the fall in Charleston, SC.

More like this
These Are The Fastest Electric Kettles You Can Buy
By Margeaux Baulch Klein
These Artists Are Reimagining Black History Month To Create A Better Future
By Katie Mitchell
25 Inspiring Quotes From Black Women To Celebrate Black History Month
By Kyli Rodriguez-Cayro and JR Thorpe
19 Instagram Captions For Celebrating Black History Month
By Ayana Lage
Get Even More From Bustle — Sign Up For The Newsletter
From hair trends to relationship advice, our daily newsletter has everything you need to sound like a person who’s on TikTok, even if you aren’t.