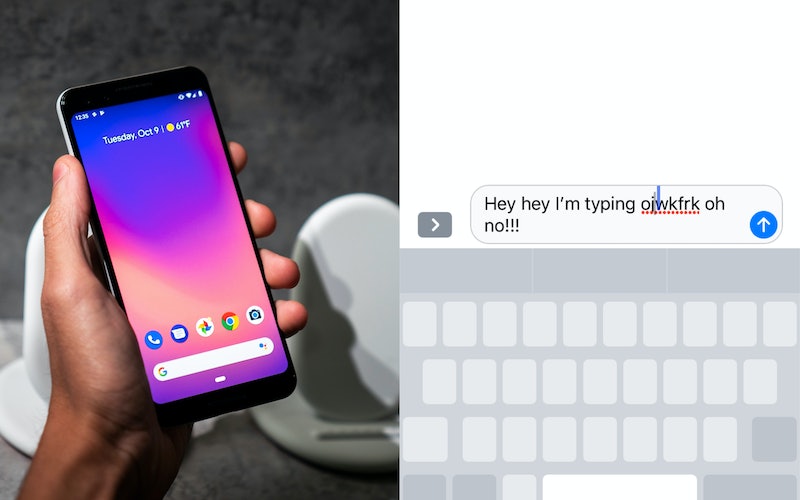 What do you do when you have a typo in a text you're writing? Do you delete the whole sentence? Tap, tap, tap to try to get the cursor the word you need to fix? Do that magnifying glass thing? Well, a viral tweet presents another option, and it might change everything for you. You can fix a typo on an iPhone with a space bar trick, as pointed out in a tweet from Twitter user named Krissy Brierre-Davis.

Now you're probably either thinking, "Um, duh. I already know, loser. I'm not reading this anymore" or "Excuse me? What are you talking about?" Well, hold on to your hats people who didn't immediately exit this article, because this may come in handy.

Open your iPhone to a text and start typing something, anything. Now hold down your space bar and press down a second time while still holding it. (You know, until it does that little clicky thing.) Now, you should be able to move your thumb all around the keyboard to get the cursor to go where you need it. As noted by BuzzFeed, you can actually do this by pressing and holding any key on the keyboard; it doesn't necessarily have to be the space bar.

Brierre-Davis tweeted on Sunday evening, "How come you guys never told me this iPhone trick? I feel duped," along with a screenshot of the function in action that she found on Facebook. In response, she has gotten 30K likes, 13K retweets, and well over 1,000 comments. Brierre-Davis also tweeted, "Idk whose original picture that belongs to, but they deserve some shine too! I simply just shared what I saw on my FB. Lol."

Brierre-Davis told BuzzFeed, "I thought I was an idiot for never having discovered this gem myself. My mind was blown. Literally." She also said something every iPhone user has experienced: "I could never get the cursor to go where I wanted. I’ve even deleted a full sentence just to avoid having to go back and change a mistake in a word." Even deleted a full sentence. Wow. I mean, the sacrifices we have made in the name of texting. My goodness.

Now, Brierre-Davis is taking in how viral her tweet has become:

In addition to the space bar trick, you can also more accurately use your cursor by activating the maginfying glass. Again, if you already know about this, feel free to excuse yourself. Everyone else, here goes: If you press down on the actual text (or note or whatever you're writing) and hold, you can move around the cursor with more precision than the "tap, tap, tap, ooh! almost got it! tap, tap" method.

Now, you have two potentially new ways of editing any mistakes you make on your phone. Of course, when it comes to something like this, though, old habits die hard. Those of us who have gotten used to tap, tap, tapping may end up continuing on as we always have. At least now we can say, "Oh my god. Do you not know about the space bar trick?!" to other, less knowledgable people. That's the real benefit here.