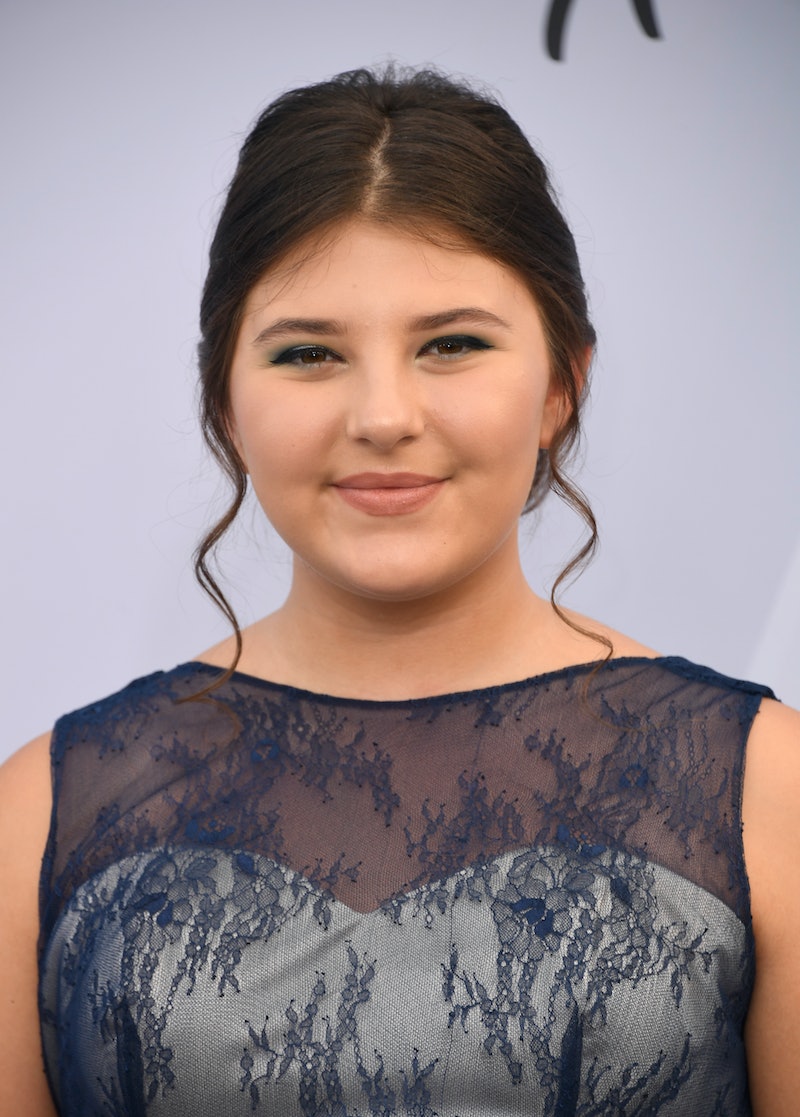 Despite the glamour and excitement, award shows can run long and actors get hungry. This Is Us' Mackenzie Hancsicsak sold Girl Scout cookies at the 2019 SAG Awards, according to E! News, and it was honestly a genius business idea. The actor plays young Kate on the popular NBC series, and took to social media to document her evening at the awards ceremony on Sunday night.

On Twitter, Hancsicsak shared a few pictures of her gown as she headed to the event, along with a message about how excited she was to attend for a second year. The star also revealed she would bring an unconventional accessory to the event — thin mint cookies. This year, awards season happens to be at the same time as Girl Scout cookie season.

The This Is Us star took advantage of this coincidence, and tweeted her plan to sell cookies, writing, "If anyone at the Sag Awards wants some Girl Scout Cookies, I'm at Table 34," with a cookie emoji. The tweet also featured a picture posing with costar Parker Bates, who plays young Kevin on the series. On Friday, Hancsicsak hinted she might bring cookies to the awards, tweeting pictures from last years SAG Awards. She wrote,

"Gearing up for SAG Awards! This was from last year’s This Is Us win. Will it be a repeat? Tune in to find out! Sunday, 1/27 - 5 pm PT/8pm ET on TNT Drama & TBS network to watch. Look for me. I’ll be the one in a blue dress w/ Girl Scouts thin mint cookies in my purse. "

Girl Scouts of America took note of the shoutout, and shared a special message for the star ahead of the awards. The organization wrote on Twitter:

"Now the SAG Awards will the even sweeter! Good luck to you and the incredible cast of NBC This Is Us!! We will be watching and cheering for you."

Hancsicsak made sure to thank the official Girl Scouts account for their support, and made it clear on social media how meaningful the organization is to her. She wrote, "Thanks so much! Love my sisters! And Sunday’s our first official selling day so maybe I can take some orders between commercial breaks!"

The Girl Scouts organization was on board for this business plan, and replied, "So a clever idea! We know you guys will do an amazing job this cookie season. Don't forget to remind everyone that those boxes are packed full with empowermint!"

It's not yet clear how the cookie sales went for Hancsicsak, but it was an eventful evening for This Is Us. The show took home the award for Best Ensemble Cast for a Drama for the second year in a row, according to Entertainment Weekly. Mandy Moore and Justin Hartley accepted the award on behalf of the cast. "Thank you so much for embracing a show that’s about life and its unpredictable loss and its sweet, sweet victories and inclusivity," Hartley said.

The SAG Awards are just one of the many events that make up an award season, but Hancsicsak made the most of the evening. The star's idea bring Girl Scout cookies to sell and snack on was pretty brilliant, and let's hope it made the event a little sweeter for the other guests as well.

More like this
Jonathan Bailey’s BTS ‘Bridgerton’ Photos Celebrate 6 Months Of “Kanthony”
By Stephanie Topacio Long
'Grey's Anatomy's New Intern Got Advice From Dr. Bailey Herself
By Grace Wehniainen
Paul Mescal, Man Of Mystery
By Samantha Leach and Heather Hazzan
Nicola Coughlan’s Description Of Meeting Olivia Colman Is Just So Nicola Coughlan
By Sam Ramsden
Get Even More From Bustle — Sign Up For The Newsletter