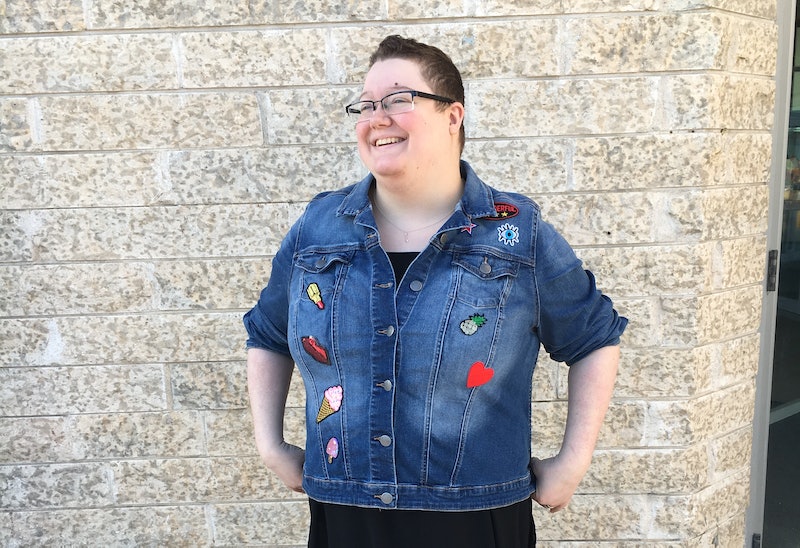 I approached legally changing my name the way I approach every other life-altering decision: With spontaneity, a lot of panic attacks, and sheer stubbornness. By that I mean, for a while I wasn't sure I wanted to put myself through a legal name change, but suddenly, almost overnight, I realized I couldn't imagine going forward without legally changing my name. And then, once I started researching and realized what an endeavor it was going to be, I panicked. Because no matter how many blogs you read, no matter how many fellow transgender folks give you reassurance, nothing prepares you for what it's really like to change your name as a trans person.

Before the legal change, though, there was the actual day-to-day change. My spouse called me James for nearly a year before I sucked up the courage to tell my parents. I've always been of the opinion that trans people have the basic right to change anything they want about themselves — their names, their bodies, anything. Do what's best for you, and screw anyone who doesn't like it, was my encouragement to trans friends who took the name change plunge before I did, or decided to start hormone replacement therapy, or asked their insurance if gender affirmation surgeries were covered. But when it came to telling my own parents I wanted to shed the name they'd given me, I was uncharacteristically tentative.

When I finally told them, my mom said she would've named me Ben if I'd been assigned male at birth, and that I should do what would make me happy. Her only caveat: "Just don't start worshiping Satan." My dad needed more of an adjustment period, and both he and my mom made it clear they would continue to call me by my deadname. That sucks, but overall, my parents' response was much, much less harrowing than the trauma many trans people face upon coming out.

With my parents on board, I had to start looking into the legal requirements. I knew from seeing fellow trans friends change their names that it's a long process. First, unlike my Canadian spouse, who would simply have to mail in a form to change theirs, to change my name I had to go to probate court. I went to the courthouse to pay my filing fee ($100 in my county) and to get a court date. The clerk laid out the other requirements for me. Like many other states, my home state required that I be a resident for a specific period of time. I was also required to print a notification of my planned name change in a locally circulating newspaper at least one month before my court date (an additional $45), and to provide the court with a reason for wanting to change my name.

I stumbled over the last one. Filling out my form, I paused over the multiple-line area where I could write my response. "I'm transgender" didn't seem like enough of an answer, though it certainly was. Finally I wrote, "I'm transgender and have been going by James with family and friends for more than a year. With their support, I'm ready to take this validating step."

My court date was assigned, my newspaper announcement was bought and scheduled. That was, of course, when I utterly panicked. The judge in charge of my probate court had been elected as a Republican, which I had known but never thought about. Suddenly it was all I could think about. I'm nonbinary, not a trans man, and I had planned on going to court in some of my usual clothes, most of which are from the women's section. But what if those clothes made the judge decide I wasn't "trans enough"?

I decided to wear my binder and buy a dress shirt, tie, and slacks. I dragged my spouse through hours of shopping, searching for the perfect outfit to wear to court. I bought a pair of pants, decided they weren't good enough, and bought a different pair. I bought two ties. Standing in the men's section at a Wal-Mart, I clutched four subtly different blue shirts, vaguely hysterical, and hissed to my spouse, "If I don't look good enough, he's going to ask me why."

That was my biggest fear, I realized: Having to explain myself to a judge who likely had never heard the word "nonbinary." Having to wonder if he would think I was somehow faking, or was doing this on a whim. The day before my court date, I was queasy and anxious, and spent most of the night awake and huddled in bed with my dog, watching Stranger Things. The Upside-Down was less intimidating than the prospect of being declared Not Trans Enough by a judge.

"Sorry," I told even myself, sometimes, when it was too late to take back my court date.

I came to court with a folder-full of papers that laid out the precedent for my case. My dad went with me, and I was prepared to say, Look, he's here, he thinks I'm doing something right. None of that mattered, though. The judge who presided over my case wasn't the person I'd thought I would be facing. It didn't matter. She came into the courtroom, sat, looked at me, smiled warmly, and told me she had looked over my paperwork and had found probable cause for me to change my name.

After she officially ordered my name change, she stuck around to chat and explained a recent, little-known policy change that meant if I wanted a new driver's license, I'd need to change my name at the Social Security office first. In a largely conservative area, I changed my name at the Social Security office, with the DMV, and with my bank. No one blinked. After we'd gone through the paperwork at my bank, where offers for Pride-themed debit cards were posted in front of every teller's workstation, the manager offered me sincere congratulations.

Of course, I'm still being deadnamed left and right, chiefly because I have a history of not sharing things about myself with my extended family. I'm not very close to them, and I'm stymied when it comes to telling them about this when I haven't even told them I'm queer, or that I got married nearly three years ago. I'll also see my deadname everywhere because it will be months before my name is updated in all the necessary places. Though I hit the big three in one day, I have to individually change my name with all the websites I use, with the passport office, with my landlord and all my utilities companies, with my student loan holders, and with my former university so I can get a new diploma. I've had a few dubious and even rude customer service reps question my name change, and have had to, on more than one occasion, correct documents from "Jane" to "James," because people assume.

Nothing prepares you for what it's really like to change your name as a trans person.

Despite that, I've had a very easy go of things. The most difficult part of this process has been my two-month fight to get one of my online accounts to update my name in their system. By and large, the stress of my name change came from fearing things that could have happened. But none of them did. I got lucky. I was able to pay the $145 in fees without stressing; when I worried my clothes would make a judge doubt me, I was able to buy new ones I was comfortable in. I had the support of my spouse, my family, my friends. I had a kind and understanding judge.

People like to say that trans folks are asking for special privileges or "extra rights." Obviously, that's not true. But it's an example of what trans people fear we may encounter when we decide to change our names. People will treat us like we're asking for something burdensome or extra. People will ask us why we can't just go by our birth names, especially if they're gender-neutral, like mine was. People will demand proof that we've really changed our name, and will sniff and sigh because we're calling for the fifth time asking why the change hasn't been processed in their system yet.