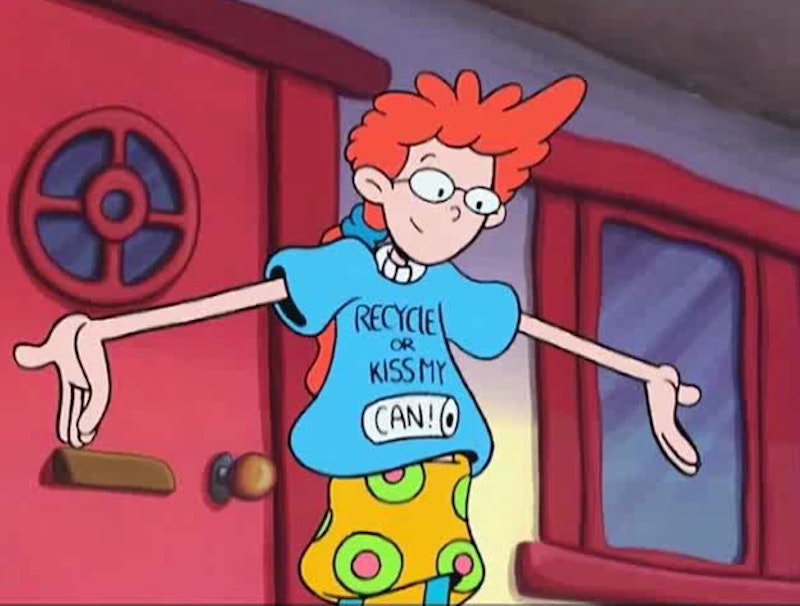 Sometimes the world is a beautiful place, especially when you discover that the voice actor for the protagonist of one of your favorite kids' shows is someone you already know. It might have been a while since you thought to look up what the Pepper Ann voice actor looks like in real life, but if you watch even a tiny bit of television, you may have already seen her. That's because Kathleen Wilhoite, the voice behind the red-haired 12 year old on Pepper Ann, appears on Gilmore Girls, as Luke's sister Liz Danes.

If you don't know her from Stars Hollow, then you may be familiar with her from one of her other TV or movie appearances, because the actor/musician has an impressive resume. According to IMDB, Wilhoite has appeared on everything from Twin Peaks to Jane The Virgin. She's also apparently the go-to woman for a believable sister on television, having played Susan Lewis' sister Chloe (who's eerily similar to Liz — not great at supporting herself and prone to picking the wrong dudes). Although she only appeared on ER for 19 episodes, according to the charismatic 52-year-old, this is part of the reason she landed the gig that we all love her for.

"This guy Jaime liked the character I played in ER. My agents told me I already had the job," she told retrojunk.com about auditioning to play Pepper Ann. "So I went in there thinking I was recording a cartoon, never with an understanding that I was auditioning for it. Thankfully, I got the part or it really would have been confounding for me."

So what does she do now? According to the podcast that she runs with Kaore Bonell, Suck The Joy, she's being as inspiring as ever and headed back to college to retrain as a teacher. As she explained on the June 22 episode of the podcast:

This isn't particularly surprising. After all, perhaps the joy of Wilhoite as an entertainer is that she's always been interested in more than one field, working as a voice actor, an actor, and a musician. She released her debut album Pitch Like A Girl in 1998, according to allmusic.com and released the album Shiva in 2000, according to the Ventura Country Star.

Besides all of this, she appears to be keeping busy leading her best life, attending her kids' soccer games, commenting on everything from Ivanka Trump's factories to the TV adaptation of I Love Dick, plus taking a million pictures of a girl, who I'm guessing based on the aesthetic similarities and caption, is her daughter ready to go to party. Proud mom alert.

Pepper Ann might have been the most imaginative adolescent on television back in the late '90s, but the woman behind the voice seems like the perfect fit thanks to her excitement about life. Willhoite is still learning new things, getting outraged about politics, and doing whatever she feels like, whether that's starting a podcast or doting on her daughter. Much as I imagine Pepper Ann would as an adult, too.

More like this
Netflix Reveals First Look At Wednesday In The 'Addams Family' Spinoff Series
By Bustle Editors
Everything To Know About 'And Just Like That...' Season 2
By Jack Irvin
17 Years Ago, 'Hannah Montana' Reportedly Almost Cast This 'Gossip Girl' Star
By Grace Wehniainen
Josh Peck Shows Love To Jennette McCurdy After Her Shocking 'iCarly' Revelations
By Radhika Menon
Get Even More From Bustle — Sign Up For The Newsletter